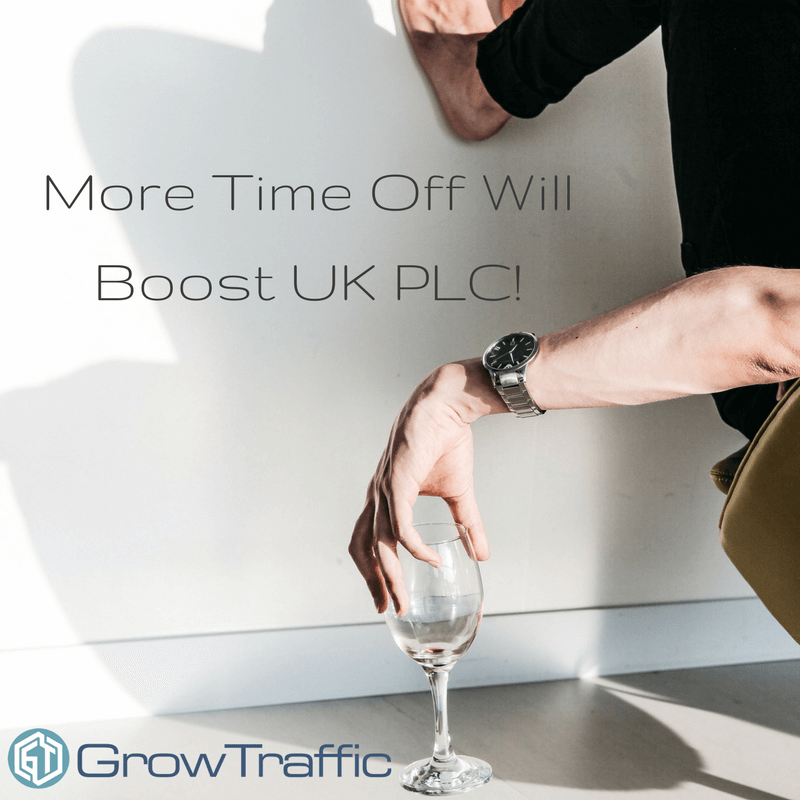 I’ve got a rule that I don’t do party political when I’m blogging. So I’ll try my best to remain as objective as possible whilst speaking about the Labour Party’s 2017 manifesto pledge to increase the number of Bank Holiday’s to 12 if they are elected.

The reason I feel obliged to get into this debate is because I carried out some research on this last year as part of a campaign concept creation for a certain absence management software firm, so I’ve spent many hours getting a perspective on this.

The basic premise of the campaign was to educate business owners about the benefits of employees taking time off. I believed this would facilitate the creation of a campaign that wasn’t overly sales orientated, but which was well aligned to the core functionality of the product, and which was also contrary to the prevailing machismo of entrepreneurial literature – at least enough to make business owners sit up and take notice.

I saw that the logical extension of the campaign – if it got traction – would be to lobby government to increase the number of statutory holiday days per year.

So, when the Labour Party announced in April 2017 that, as part of their manifesto, they’d be looking at increasing the number of Bank Holidays by four from eight to twelve, I immediately thought of the campaign concept I’d brought to the table months earlier.

It’s probably best to say that the idea was shelved because it was felt business owners would find the concept of actively encouraging their employees to take time off a bitter pill to swallow. This belief, which is probably correct, is one of the main reasons I think more holidays have to be legislated for.

The Pros For Business of Annual Leave

Business owners are generally well versed on the holiday entitlements of their employees and they’ll have a good feel for the impact these planned absences have on a business. Most business owners clearly see the benefits of their team taking time off, but for many it’s bittersweet.

At the moment, full time employees in the UK are entitled to 28 days off – that’s broken down into 20 days of annual leave holiday and 8 Bank Holidays. However, this places the UK in position 74th in the international holiday entitlement rankings. Our closest economic rivals and neighbours, Germany and France, offer 29 days and 36 days respectively.

28 days may already feel like a lot to many business owners, however there is a significant amount of research to show many members of the team won’t take their full entitlement. I’m a prime example of this, it’s the 27th April and I have just taken off a day-in-lieu I had run over from 2016. We’re almost in month 5 and I’m still catching up with the holidays from last year!

Glassdoor research demonstrates that only around 30% of staff take their full holiday allowance every year. Whilst business owners would be forgiven for thinking this would see them getting additional days out of their employees, there is a long term detrimental impact for employees and for the businesses they work for.

There is an obligation and responsibility – through Regulation 15 of the Work Time Regulations – for employers to ensure that their employees take the holidays they are entitled to, should it be clear they are becoming unwell because they’re not taking time off.

This is a mental health issue of course, and many business owners, just like the rest of us, can shy away from asking after someone’s mental health. One of the main questions a business owner should be asking themselves is what are the reasons people in their business aren’t taking their full entitlement?

There are definite benefits of employees taking time off to the business itself, also. When employees take a break, they’ll have a day or two off, possibly go on holiday for an extended period of time and then they’ll come back renewed, refreshed and refocused. This should see their productivity increase. Additionally, they are likely to be less stressed out, which means they’ll be less likely to take time off sick and businesses will see fewer costs associated with staff churn.

So let’s look at why people don’t take their full allowance. Those reasons may include:

When employees request time off, they are always conscious that an employer could refuse to allow the employee the requested leave. There has to be a valid reason for holiday refusal and an employer should look to work with the employee to find a suitable alternative.

One of the biggest proponents of innovative people management solutions, Richard Branson, introduced an unlimited holiday system at Virgin. The idea behind this was to let people feel trusted; they can take as much time off as they want because as adults, they are trusted to get their work done. Unfortunately, one of the negative aspects of this HR policy change is people actually took less time off work. This was largely put down to employee feelings that they may be discriminated against if they were the only one to take their allotted time off.

Hence, much of the above points to the obvious benefits of the Bank Holiday system, which enables the majority of workers to take time off without the associated holiday stress.

HR professionals around the country will tell you that people must take time off, and that business productivity will actually increase if people are well rested. But business owners are still less inclined to see the benefits of employees taking off holiday time.

Parkinson’s Law say “Work expands to fill the time available for its completion”. Maybe “busy fools” is another way of looking at this. This speaks of productivity though; the economic system can only create a certain amount of wealth at any one time, and thus adding more resource (amount of hours spent doing a task) almost never proportionately increases the amount that can be produced.

And productivity is central when we’re thinking about the benefits of the proposed four additional Bank Holidays. When looking at international productivity rankings, Britain seriously lags behind those of the other developed nations. The Office for National Statistics suggests that, in 2015, the UK’s productivity was 16.6% below that of the average G7 productivity levels. This continues a trend that has been seen over a large number of years.

This productivity gap would suggest that employees working more isn’t going to solve the productivity problem in the UK. What it does suggest – if we look at this in conjunction with Parkinson’s Law – is that by making workers take additional time off, we are more likely to increase our productivity without significantly damaging the economy.

And, if you’re not convinced by this argument, then consider the additional holiday in 2012 for the Queen’s Jubilee; we had a four day weekend, including a two-day Bank Holiday, and this only reduced GDP by 0.3% in the month. This suggests there is plenty of capacity in the system for at least some of the Bank Holidays that are now being proposed.

Primarily, this is because the UK is a service-economy and services not provided one day can generally be transferred to the next day, unlike during our manufacturing past, where output was simply lost as the machines shut down.

In fact, one government report estimated that extra Bank Holidays could actually benefit the economy to the tune of an extra £1bn each, let alone increase our relative productivity rate. So we could see the economy grow by £4bn if this report is correct.

About More Than Just Business

Of course, this whole initiative is politically motivated and the suggested four additional Bank Holidays are intended to “unite the nation”. According to the Labour proposal, there would be a new Bank Holiday for each of the patron saints of the nations of the UK: St George, St Andrew, St David and St Patrick. In an era of growing nationalism within the UK’s constituent countries, anything that could be implemented to help us celebrate our diversity together has to be a good thing.

Moreover, St Andrew’s Day is already a public holiday in Scotland, where the issue is devolved, as is St Patrick’s Day in Northern Ireland, so there is a clear precedent for this in the UK. And, although any Labour government would have to negotiate with the devolved legislatures, I’d expect with a national mandate, the changes would likely quickly be achieved.

The question is, as we move towards a new type of workforce, do modern workers want extra enforced Bank Holidays? When people are choosing to work flexibly, to work shifts, to work when they want to etc., are the Bank Holidays really the kind of holiday entitlements that are fit for purpose for the future? I think we’ve not fully entered that new paradigm. And there are still a lot of people (the majority) who work in much more traditional working environments. It’s this majority who will benefit from the four new proposed Bank Holidays.

Still not convinced? Workers in the 19 other G20 nations on average have 12 national holidays. Why are British workers less worthy of holidays than other comparable nations?
Whether Labour gets into power following the election of June 8th or not, it’s got to be a good thing that the important issues of the UK’s productivity, finding ways to celebrate our UK’s cultural diversity, and employee rights have been thrust into the centre of the national debate.