Are There Going To Be Lots Of Redundancies In Marketing After The Lockdown? 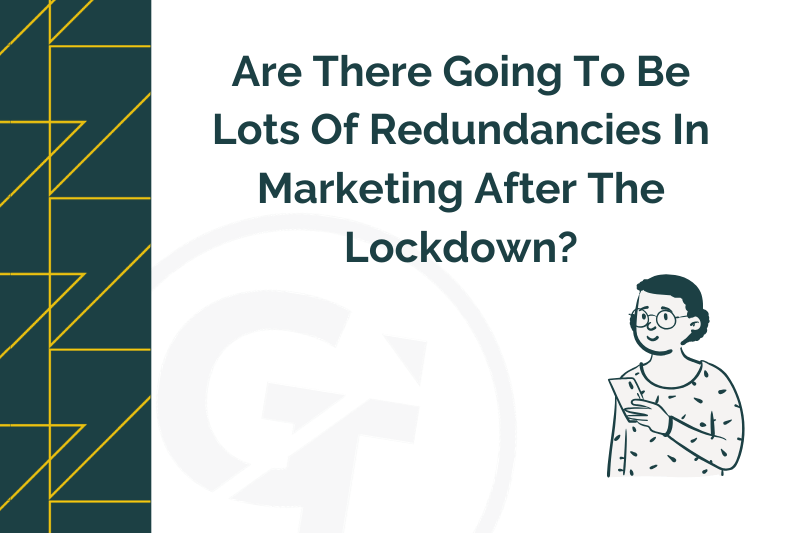 We all know when there’s a downturn, marketing should be the thing businesses redouble their efforts on, so they build-out of the downturn. I say “we all know it” because in reality for many businesses marketing is the first thing to go. And that got me wondering if there are going to be lots of redundancies in marketing after the lockdown.

The first thing to say if the marketing industry is vast and covers everything from events to PR, from advertising to branding and from ecommerce to analytics. There is no way to say what will happen to the whole marketing industry, it doesn’t work like that. But we can point to some trends, perhaps first looking at what the big marketing agencies are doing, as well as giving you some anecdotal evidence from our SEO and content marketing agency is experiencing as well as taking you through what my friends in the marketing profession are saying.

What Are The Biggest Marketing Firms Saying?

The Drum has done some interesting analysis of what some of the biggest marketing agencies in the world have been saying. Their analysis is as follows:

I’ve copied and pasted those bullet points – feel free to check out the original article, which had more detail and analysis. I wouldn’t normally grab so much but I think it’s really valuable to include it in this post.

Scarily, only 3% of companies taking part in Econsultancy’s and Marketing Week’s Business Impact Survey have said they are increasing their budget with only 7% of brands reporting they are seizing this opportunity to invest in marketing. The big guys know to spend out of a downturn and the fact they aren’t, points to the perilous position we all find ourselves in.

Anecdotally, I’ve seen friends in the advertising agency and marketing agency industry being made redundant since the end of January/February. This isn’t, therefore, something that’s just happened, rather there may have been a bit of a slowdown taking place perhaps as people saw the pandemic coming or maybe just because we were heading for a bit of a downturn.

In Marketing Week, Colin Lewis said: “Careers won’t pick up where they left off – Marketers left unemployed by the COVID crisis shouldn’t assume their careers will resume in the same form – you’ll need to rethink your skill set and challenge your own behaviours.”

He went on to advise marketing professionals “if you don’t have a signal such as a famous brand on a CV, you’d better have – or develop – a skill that is in demand. Wise-up to the fact that employers buy ‘hard’ skills, despite all the talk about soft skills.”

I can honestly say I get this as well. I remember when I first got made redundant from a marketing role. It was around the time of the Credit Crunch. I was lucky because I had the ‘big names’ on my CV, I’d worked for We Buy Any Car during their marketing launch activity and I’d work with almost every major automotive manufacturer by that point. But I still found myself feeling vulnerable and it was that vulnerability that made me focus on becoming a freelance SEO consultant.

The Credit Crunch and the last recession it precipitated feels like a long time ago now and I can’t claim this is the same. It’s not, it’s going to be much worse for a lot of people and I think we’re going to see a lot of marketers finding themselves on the scrap heap after all this is over.

The ones who will succeed will be the ones who have laser-sharp skills. I bet most of those skills will be in acquisition as well. Too many marketers out there are good at creating comms in the forms of blogs and emails but how many of them are awesome at content marketing? Expect the best content marketing agencies to be highly sought after because they combine many of the marketing disciplines. They create content in the different phases of the buyer journey and then promote it and ultimately use subtle messaging to acquire customers. That’s clever marketing and a lot of marketers out there aren’t ready to call themselves expert content marketing professionals.

I also predict paid search and paid social consultants will be in high demand. Think about what these guys do. They are all about precision acquisition strategies, ie using exactly the right keyword or targeting to get to a customer at the decision phase of the buyer journey. They don’t even worry about raising awareness or helping potential buyers to consider your service. They just hit the customer when they’re ready.

You still aren’t sure? Do you still think all those marketers will still have a job when the furlough scheme comes to an end? The reality is, most of those businesses will keep their other employees over their marketers because they’ve all had to hunker down for months and run on their reserves. Their reserves are depleted now and most businesses will have to spend a certain amount of time just building back up their bank balances to the point where they feel comfortable making the investment into marketing.

If you are in the unfortunate position of having to make some of your marketing colleagues redundant (and I’ve been there it’s horrible I’m sorry!) here’s what our local HR consultancy advises:

“No-one wants to go down this path but sometimes it’s necessary to enable the business to survive. Beware that you must be confident that you are dealing with a genuine redundancy.

“Bearing in mind that if you’re considering making more than 20 people redundant, consultations must last at least 30 days so you may need to start the ball rolling now. More than 100 people and you’ll need to allow 45 days.

“If you have pregnant workers or employees on maternity leave there are extra considerations for employers.”

Of course, there are going to marketing redundancies in the coming months. It’s inevitable. If you’re new to marketing this is something you’re going to need to come to terms with because it’s likely one way or another you’ll have to leave one role at some point or another. If you’re an old crusty seadog like me, well you’ve probably got the scars on your back to prove it.

I set up GrowTraffic during and because of the last recession, but over the years I’ve learnt it’s only by getting other people around me things can become something so much bigger. And I’m hoping for more or the same in the coming months and years. After all, there are industries that are growing; take media or HR or food manufacturing. A friend of mine owns an aluminium, garden furniture casting business and he’s never had so many enquiries! For lots of businesses, business is booming. I also expect a green revolution to be created off the back of the lockdown with governments actively investing in and promoting green industries and green technologies. They will need marketing.

At GrowTraffic we’re hoping we’re going to be able to bring all our furloughed team back off furlough and get them back in the business. We’re fighting hard for them. I’m also hopeful we’ll get some great jobs in, perhaps from customers who are in a position to really push their digital marketing activities in this time – the profitable ones who want to be in a position to beat the heck out of their rivals when all of this is over! And I’m hopeful that some of those marketers who have found themselves in the wrong place at the wrong time will be available to come and work with us at GrowTrffic in the future.

by Simon Dalley
1 View00 Likes
Tags: Are There Going To Be Lots Of Redundancies In Marketing After The Lockdown? marketing industry redundancies redundancy

Are There Going To Be Lots Of Redundancies In Marketing After The Lockdown?