From An SEO Perspective Should We Migrate Our Website From A .co Domain To A .io Domain? 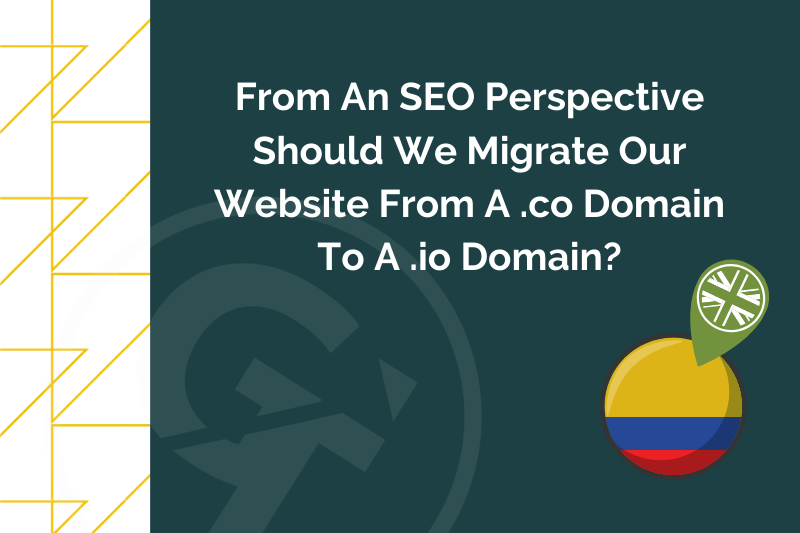 Many technology companies are starting to migrate from the traditional top-level domains (TLDs) to more specialist technology domains, with .io being the options thats increasingly being used.

According to Wikipedia, the Internet country code top-level domain (ccTLD) io is assigned to the British Indian Ocean Territory. The . io domain is administered by the Internet Computer Bureau, a domain name registry company based in the United Kingdom.

I was recently asked this question by a client:

If we were to move from EXAMPLE.co to EXAMPLE.io, how much impact do you think that would have on the website from an SEO perspective?

Obviously we would have redirects in place, but we’re considering making the move and want to understand what to realistically expect from SEO detriments.

I had a bit of think about it and this was my reply:

In theory, as long as you have a Google Search Console account set up for each domain prior to the move, you can create the relevant 301 redirects and then submit a change of address request when you’re ready and it should be a seamless move.

There is some link equity deprecation with 301s, but as long as the change of address tool is used it should be fine. In fact, I believe Google advises that you only have to keep the 301s in place for 3 months (although I would recommend just keeping them in place).

The change of address tool and the redirects deals with the issue of the different domain ages as well.

Google seems to treat .io as a gTLD as they do the .co domain, but it has the advantage that it’s maintained in the UK, which has to be better than the .co domain, which is Columbian.

From a branding perspective, technology companies are moving towards .io but .co is still more widely recognised and may be perceived with more credibility, so there may be a CTR issue from the SERPs. This could impact user signals, which are looking increasingly important as ranking factors.

If you are considering migrating to a new domain, please, feel free to get in touch for what’s best for your SEO.

by Simon Dalley
816 Views00 Likes
Tags: From An SEO Perspective Should We Migrate Our Website From A .co Domain To A .io Domain migrate .co to .io

From An SEO Perspective Should We Migrate Our Website From A .co Domain To A .io Domain?