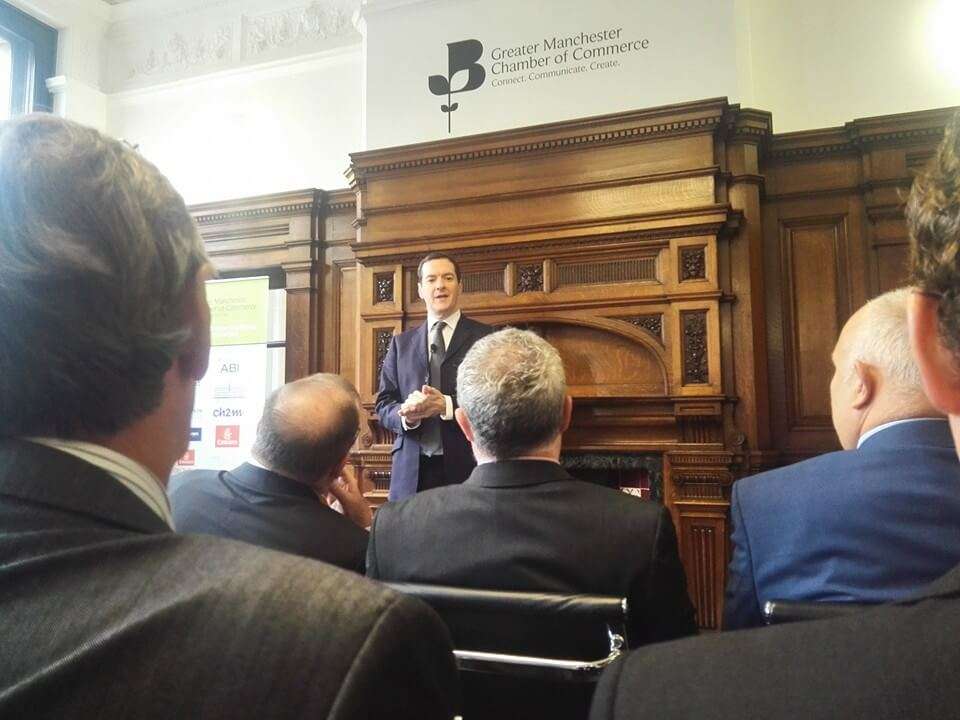 I was honoured to have attended an event today in which the Chancellor of the Exchequer, George Osborne, addressed Manchester and North West business leaders about the role of the North in a post-Brexit vote Britain.

George Osborne was speaking at the Greater Manchester Chamber of Commerce and was keen to address the role the Northern Powerhouse has to play as the UK emerges from the recent EU referendum. This is something I’m especially interested in myself due to its implications not only for business broadly in the North, but also for the digital economy of the UK and the implications for the businesses of Bacup and Rossendale where I currently live.

Repeating the phrase realism and reassurance, Osborne made it clear his belief that the Northern Powerhouse is now more important than ever.

Osborne began by discussing how the referendum went. He recognised that outside the major cities of the North there had been a clear and decisive majority for leaving the EU. He argued that this was in part due to economic disenfranchised Northerners, reiterating his belief that the Northern Powerhouse is the only way to readdress the economy of the UK to build a strong and enfranchised North.

He went on to challenge local businesses and local government to work together more closely to deliver the vision of the Northern Powerhouse. Osborne argued that we all needed to come together to support one and other, a message he said which was at the heart of the Northern Powerhouse strategy and which had already delivered significant benefits to Liverpool, Manchester, Leeds and Sheffield.

Whilst stating how important the Northern Powerhouse is in re-enfranchising Northerners and rebalancing the economy, he went on to say we would need to have a national conversation about what our future relationship with the EU will be. However he made it clear, having campaigned for the remain vote that he had no intention of putting his name forward for leadership at this stage.

He commented on the outcome of the referendum saying that he still believed remain would have been the correct outcome, but that he respected the instruction of the British people to leave the EU and he urged businesses to remain engaged in the national debate about what a future Britain should look like, with a greater emphasis on what our relationship with the EU should look like.

Osborne also stated that in his opinion, we shouldn’t trigger Article 50 until we know what the relationship with the EU will look like. This suggests to me that this could go on for some time yet although it also suggests we could have a period of stability, a kind of phoney-Brexit.

I believe it’s really important that we continue to champion the Northern Powerhouse concept. Osborne was right in pointing out the advantages of interconnectivity and only business can help make that happen. I think some of scale and scope of the Northern Powerhouse has now to be questioned however the core of the concept is still sound.

Manchester and the surrounding area is rapidly becoming the UK’s tech capital and we need to continue to help that grow whilst looking to the cities and towns around us for like-minded businesses to work with. Only then can we help create a North that compensates for the economic engine of the South. Much like heavy industry once did.

We’re already seeing the positive impact of local devolution and no matter what the outcome of the EU vote, I’m confident this new form of local government will only become more important in project of finding a new direction for the country in the world.

Since the advent of the Northern Powerhouse we’ve seen the North experience a huge surge in the number of digital startups and these are going to help us grow our way out of any impact the referendum results may have. The North is truly in an interesting position for the UK economy, its relationship with the EU and indeed the world.

And whilst the economically disenfranchised Northerners Osborne referred may have contributed towards a Brexit vote, they’re now in a prime position to help develop a new economic paradigm and the digital economy will be at the heart of it.

What does the Northern Powerhouse mean to the digital economy?