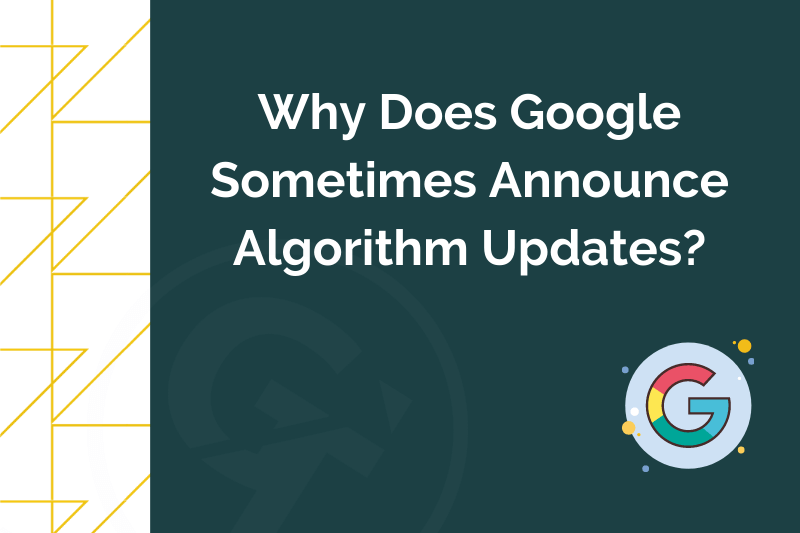 If you are responsible for the SEO of a website, you may have noticed that Google sometimes announces algorithm updates.

You may also notice that every so often there is a sudden change in your ranking and traffic – and no explanation for it. Us SEO experts and other folk in the SEO community usually put this down to an unannounced or unconfirmed algorithm update.

What Is An Algorithm Update?

Google’s algorithm is a complex system used by the search engine to index its BILLIONS of websites and provide the search user with the website that best matches their query.

Google search has been around for more than 20 years and has evolved immensely since it launched.  Google is consistently trying to improve the tool for search users, and they do this by updating the algorithm.

If you want your website to do well on Google, you should be keeping track of all algorithm updates, big or small.

Google Algorithm Updates Over The Years

Let’s take a super quick trip down memory lane to some of the biggest Google algorithm updates of the last ten years:

Find out more about these updates and others here.

Why Does Google Announce Some Algorithm Updates But Not Others?

Google usually announces a lot of its algorithm updates before it rolls them out, particularly if they are going to have a noticeable impact on the search engines.

These announcements allow SEO and marketing professionals to optimise their site and prepare for the upcoming changes.

However, there are a lot of smaller updates and changes that Google does not announce before rolling them out. These are usually picked up on relatively quickly due to changes in rankings and traffic. They are then discussed amongst SEO and marketing professionals on forums and dedicated SEO websites, such as SE Journal.

Sometimes, these updates and changes will then be confirmed by Google. Other times they won’t. In 2018, Google’s John Mueller stated that Google confirms some updates if they are confusing the SEO community.

Why Is It Important To Track Google Algorithm Updates?

Google algorithm updates, whether announced or not, can impact your website.

Some updates help your website rank higher and gain more traffic, other updates damage your website’s rankings and appear to punish your SEO efforts.

Algorithm updates tend to have an impact on organic search traffic, visibility, leads and conversions. And this will go on to impact your conversions, return on investment, and ultimately your revenue. So, it goes without saying, you need to be keeping track of Google algorithm updates.

How Do I Track Google Algorithm Updates?

We try our best to share Google algorithm updates on the GrowTraffic blog. We also aim to share tips and advice on how to optimise your website and minimise the impact of the update.

Aside from our blog, you can find updates on Google algorithms (and SEO in general) on the following sites (these are some of our favourites):

If you would like some help with SEO or any aspect of your digital marketing, get in touch with the GrowTraffic team. You can email us on [email protected] or give us a call 0161 706 0012. We’d love to hear from you!