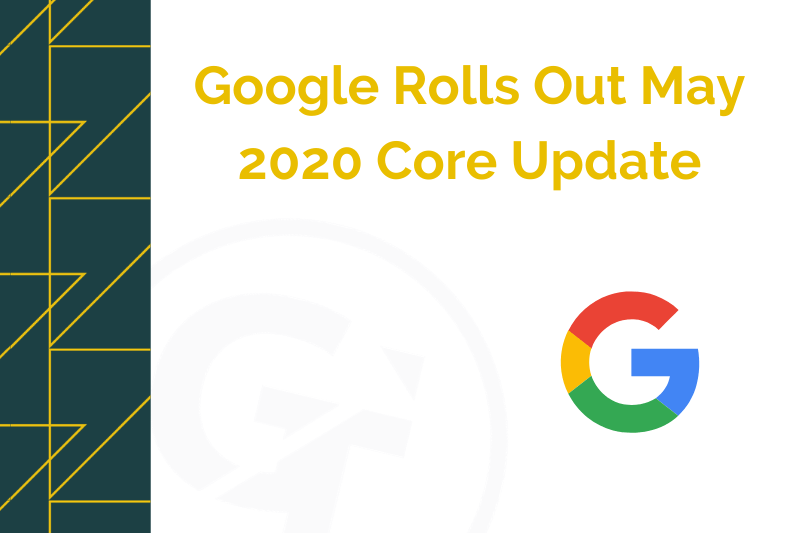 Google has announced they are rolling out a core update to their ranking factors, which will see many SERPs changing in the next day or so.

We’ve been noticing some wild fluctuations over the past week. This tends to happen when a Google Update is about to happen and we noticed we’d received larger amounts of traffic than usual from organic traffic over the weekend. So we had been speculating something was happening.

Google announced on Twitter that the May Core Update would roll out yesterday (Monday 4th 2020), meaning Google has released its second core update of 2020, the last being rolled out in January.

Of the update, Google said: “Later today, we are releasing a broad core algorithm update, as we do several times per year. It is called the May 2020 Core Update. Our guidance about such updates remains as we’ve covered before.”

Google went on to say: “As is typical with these updates, it will typically take about one to two weeks to fully roll out.”

As this is going to take a week or two to roll out it’s important not to react too quickly as you may be reacting without a full understanding of what’s happening with your rankings. Conversely, if you carry on with all those good SEO practices then it’s likely you’ll continue to benefit. In a week or two, you’ll be able to take stock and in that time the SEO community would have had time to do some research to work out what’s happening in the SERPs.

Saying that, changes in SERPs from core updates are generally a reflection of content relevancy, so the best advice is to continue to create more content about the topic you are focused on.

The update will be officially known as: “May 2020 Core Update” It’s a bit of a shame that Google now tries to stay one step ahead of the search community by naming these things themselves – meaning the naming conventions are that bit more boring! But that’s what to look out for when people are talking about this.

The timing also gives a good indication of Google’s thoughts on whether they should pause update activities throughout the Coronavirus period where many people thought they would wait until after the crisis had finished.

In fact, this update has an opportunity to be very volatile because of the changes in the landscape since the outbreak of the COVID-19 Crisis ie lots of websites have paused or reduced activity over the lockdown period, as well as changes in search trends associated with lifestyle changes.

It’s the morning after the update and GrowTraffic’s rankings appear to have done very well out of the May 2020 Core Update, but we appreciated many businesses will feel the hit from this. Here are what our average rankings are looking like this morning:

Good luck. If you’ve been hit by the update and would like us to take a look at your site and online presence please get in touch.