Google’s Page Experience Factors To Go Live In May 2021 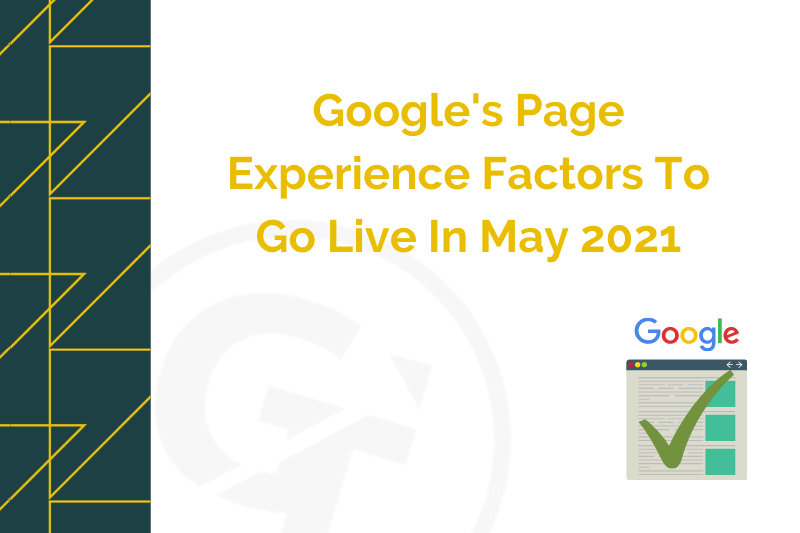 About six months ago Google announced they were going to introduce a new ranking factor called the Google Page Experience Update and they said that would happen in 2021. They’ve just confirmed the update will go live in the May of next year.

Google only gives us a warning about updates when there is going to be a big impact on them or when they are setting a new standard for how the internet is going to work.

According to Search Engine Land, a Gooogle spokesperson said the company will also be testing a “visual indicator that highlights pages in search results that have great page experience”

If you’re trying to work out what Page Experience means to think about everything from HTTPS to page load speed, to the way the content loads – things can’t jump around all over the place and you can’t stick an interstitial between the two loading pages just to cover the rubbish load speed. Google holds these under the new Core Web Vitals and we’ve explored this earlier.

Google is going to roll this out and not just drop a hard update on us and they say they’re going to include “visual indicators” in the SERPs. This should be valuable for those businesses who don’t spend their every waking second thinking about what Google is up to or have an SEO consultant like me on the other end of the phone to help them out.

We’ve seen these labels before. The one that stands out in my mind was the mobile-friendly labels that were included in the SERPs as Google tried to nudge websites to go mobile.

Google’s spokesperson said: “We believe that providing information about the quality of a web page’s experience can be helpful to users in choosing the search result that they want to visit.”

Crucially, it looks like Google will use a visual indicator that lets people know the criteria have been met rather than saying the page doesn’t meet page experience criteria. That probably means that you’re also going to get a bit of a click-through rate increase benefit.

These visual indicators are going to be around for a while if the past is anything to go by and I don’t expect the majority of the active websites on the internet to have implemented the page experience standards for at least 18 months because for many sites it will require a rebuild with page experience factors in mind from the very beginning.

Google has indicated that they are going to start rolling out the visual indicators sooner rather than later but it’s only going to be a test from them, they won’t be directly correlated to the page experience factors, because they will only be rolling out in May 2021.

However, that’s not to say there won’t be an impact from the visual indicator. If those pages get a higher click-through rate it’s possible we’ll see those pages who confirm to page experience factors rising through the rankings before the update is fully implemented.

Let’s not overstate this but there is an opportunity here to get ahead of the curve and get some better rankings in the short term before everyone else catches up.

I’ve spoken to a number of freelance SEO consultants over the last couple of months and I am staggered about how many of my colleagues seem to think this isn’t going to be an important ranking factor and that SEOs should just concentrate on link building. This is going to have an impact and you need to be speaking to people who are prepared to help you on this and not those who are just banging on about building more links or building more content (they’re both important of course!).

Google’s Page Experience Factors To Go Live In May 2021