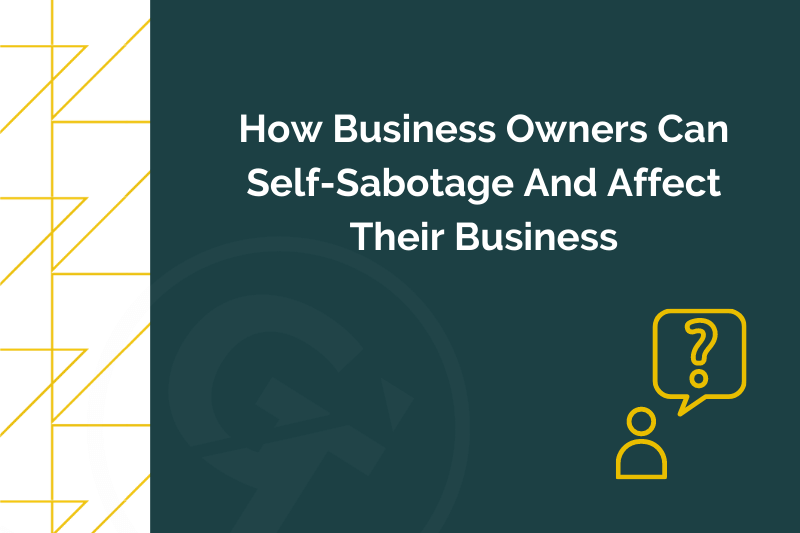 I’ve been on the journey of being a business owner for a long time now. Time and time again, I have to admit to myself that I self-sabotage my own business and performance. I reckon I do this unnecessary act of self vandalism on a virtually daily basis and it erupts out of me on occasion and completely decimates various elements of the business.

I’m working on it, although I doubt I’ll ever be able to truly rid myself of these behaviours. But I do recognise that if I can reduce these elements of my own behaviour we’d probably see a performance improvement and just make it a bit of a better work environment for everyone concerned.

I don’t think I’m alone in this behaviour. Just about every business owner I’ve ever worked for has been pretty toxic. I’m not on the scale of some of the sociopaths I’ve worked for, but I’m certainly on the self-sabotage scale.

Even when I sit back and recognise everything is going to plan, I’m not happy with elements of it and I can end up reacting to it. And that is incredibly destructive.

Most of those business owners I used to work for would never in their wildest dreams be open to admitting that they might be the problem in their business. I am always acutely aware of what it must be like to work with me. Unfortunately, I tend to recognise my behaviour after the act. Let’s be honest, I’m writing this blog right now to try to understand why I’ve just reacted in a way I would have preferred not to have done.

We’re all guilty of poor use of time and procrastination or doing the wrong thing altogether in such a way that you are being ineffective. I do this from time to time of course. As well as a cathartic exercise, this blog is in itself is an act of procrastination from the task I was going to be doing this evening. Of course, these self-sabotaging activities could be threatening to the business. My actions today, although innocuous on the face of it, brought GrowTraffic to a moment of what may be seen as an existential crisis. At least as close as a company can get.

I have a problem with ownership and control of GrowTraffic. This issue is absolutely rooted in the reasons I established the business in the first place. I wanted to create a business that would ensure it wouldn’t be a problem if I was made redundant again, like I just had been the previous year. But I wanted it to be more than just my business and I wanted it to be bigger than just me. I brought on other directors and gave up some of that control for a more stable business that wasn’t just me. But I am awash with contradictory feelings when it comes to how I feel about the business. I want it to grow and become more and more successful. My rational brain knows all these things but then my subconscious screams that this business is all about protecting me. Unfortunately, my fight or flight reflex can sometimes kick in but I rarely realise why I’ve behaved the way I have until after the fact.

I think anyone who thinks they are in the least bit rational is fooling themselves. We act from the basis of everything from pride and fear, hope and ego, joy and sadness and all those other annoying emotions. It’s always hard to pin them down until you look back at how you behaved. We didn’t evolve to run businesses, we evolved to run from predators. The old fight or flight options.

I think fear is one of the major elements of self-sabotage. For many businesses owners fear is what created the business in the first place and sometimes it can just become the most dominant feeling after a while.

I always realise afterwards that I’ve self-sabotaged. I am unaware of it or perhaps in complete denial about it and how it impacts those around me. I am generally one of the first to say I am by now, at the age of 40, quite a broken human being. I am a mess, my mental health is all over the place and I’m not a great business person. But I’m trying to get better and I think I’ve not done badly at reducing the impact I’ve been having on those around me. But I also think that my increasing recognition of my self-sabotage is something that’s going to really propel me.

Here are some of my self sabotaging behaviours

No planning enough – sometimes I don’t even plan my day and I’ve never been good at planning for a quarter. I can do it for a client but can I do it for myself or for the business? Nope, I really struggle.

I don’t recognise my own fear – I react emotionally all the time and it’s often because I’m fearful of a situation but unfortunately I often don’t recognise I’m reacting in that manner before it’s too late.

Procrastinating – I’m doing this now. I should be finishing off a PPC audit but instead, I’m delving into my deepest darkest recesses trying to understand why I’ve just reacted to a situation that resulted in a conversation about shutting down the company.

Not delegating – in my corporate marketing roles I was the master of delegation. I brought people around me to get my things done. I very rarely was solely responsible for the delivery of anything but guess what? In GrowTraffic I find myself trying to do too much, not delegating and invariably I end up dropping the ball.

Separating the business and personal life – this is hard at GrowTraffic because my wife is a fellow director and at the moment we’re working from home in lockdown so everything just kind of merges into one. We work day and night and it’s our main topic of conversation.

Not recognising burnout – I do burnout and in that period my mental wellbeing goes downhill. I can sometimes recognise it before it happens but everyone knows about it if I’m struggling and not in a good way.

If you’re reading this blog you’ve probably got your own list of self-sabotaging behaviours or some you recognise from my list. If you do recognise experiencing some of these how are you going to start to change them?

I believe that owning them is a good place to start. My drama today came from something as simple as feeling like I was being left out of a marketing campaign. A non-existent marketing campaign by all accounts. It was bigger than that though, I was feeling like a fellow director could potentially attain more visibility than me and this would in some way damage the business or damage the business’ ability to deliver on its number one objective – to keep me employed. Of course, that’s no longer the primary objective of the business and hasn’t been since I was a freelancer. It’s silly when I write it down and I don’t think I realised this is what I was thinking, but it’s what I suspect it boils down to.

It’s an area I’ve been working on already. I can see it as a benefit of more people in the business increasing their visibility, most of them are better at that sort of thing anyway and because it propels me to do more. It also means I can focus on developing the business in other ways, in the direction that will have the biggest long term benefit. I’ve also been reminding myself these things don’t really matter or shouldn’t at least. Clearly, still more work to do.

I think it’s probably best to pick off the problems that have the biggest rewards for the business. You’ve got to be aware of and ready to admit to yourself what these problems really are and which ones you can get the biggest benefits from changing.

Do one that you can achieve easily at first though. Take a step back and work on an issue that is actually resolvable with a change of mindset. Most of these self-sabotaging issues are bad habits you can make a conscious impact on every day until you’ve reset the issue.

Working on fear is something I spend some time thinking about and trying to overcome. When I think about fear, I think about it from a subconscious perspective. I’m not afraid of anything per se, but my brain is reacting as though it’s afraid of a situation. To think about this I tend to ask myself how can I benefit from the situation I find myself in. By repositioning the situation I am reacting negatively to, I can turn it into a positive situation. Of course, I don’t always get it right and that can leave us in a right old mess. Especially because I tend to shout the loudest.

I’ve consistently made the mistake of not communicating my vision for the business with those around me and ultimately this has led to a divergence between my expectations and the outcomes I see around me. It’s tricky to bring it back after a while because everyone else develops their own expectations and perceptions. Even if they are wrong or based on false assumptions, you’re still going to have to accommodate them in some capacity.

If you’ve made it this far I’m assuming you’re behaving in some self-sabotaging behaviours in business that you’re trying to resolve. Don’t beat yourself up too much, we’re all guilty of these from time to time, some more than others and I would guess there will be many much worse than you. But it is time to act. It’s time to start picking off these negative behaviours one by one, put a plan in place and stick with it. It will take time and it won’t always be a linear progression but you won’t get anywhere if you don’t make a start. And if you are able to make progress on these issues it’s likely to be hugely beneficial for your own business.