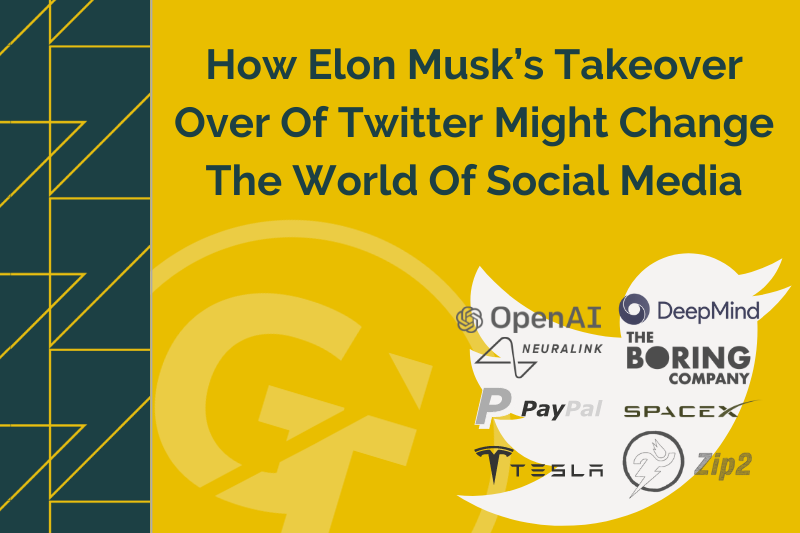 As the force behind Tesla, SpaceX, The Boring Company and Neurallink, as well as the former CEO of PayPal we can get some idea about how Elon Musk might choose to run Twitter and this in turn, might give us an indication about the future of social media in general.

Clearly, Elon Musk is only one man and can’t possibly directly run several of the world’s biggest or best-known companies. In order to run these businesses, Musk relies on a load of senior leaders. Musk’s role in many ways is a visionary leader and it’s his disciples who carry the message back to and throughout his organisations.

So if we now consider he’s acquiring a majority stake in Twitter, we should probably be able to think about the types of people Musk puts around him and how they carry out his wishes. This should tell us a lot about what he might do at Twitter.

When I was thinking about how GrowTraffic and the rest of our organisations would work I was always very conscious my strengths are not operational. As I always say, I’m a grand overview kind of guy. Clearly, I am no Elon Musk, but I do think I might have some understanding of the mindset of someone who likes to set the agenda but who perhaps can’t for whatever reason directly implement that change.

The key thing is building a business that runs without you. That has always been part of my objectives. For necessities sake, it also must be part of Musk’s objectives for his businesses. One of the things I’ve struggled with is communicating my vision. Somehow we get to where I have always wanted us to go, but it’s not a smooth process. I expect Musk is probably better at this than me because it’s vision and mission that enable the leadership of businesses to function properly without correctional intervention. It’s something I’m working on myself.

From what we know about his businesses, he hires career-focused and driven individuals who will go above and beyond – and who are loyal, perhaps to a fault – and perhaps most noticeably are relatively young compared to other individuals in similar organisations.

I’ve always tended to hire young people myself. I’ve not set out to hire younger people, but that tends to be the outcome. I look for people with energy, who think differently and who are ambitious or as I put it, people, who think bigger.

Some of the best employees we’ve had have been super young and they’ve just picked everything up and made themselves central to everything we do. I think it helps because they are fairly green when they start and you have an opportunity to develop as you would like them. They don’t have the same preconceptions that someone longer in the tooth would. And this it seems, is exactly what Musk does too.

Musk is demanding too. According to ex-employees of his businesses, they tend to work long hours, in fast-paced working situations. This is potentially quite different from the way Twitter has been run over the years, where employees have the kind of perks and working conditions most people could only dream about.

Twitter is also said to be fairly chaotic with leadership that has been too wed to keeping the core product the same as it’s always been. Co-founder Jack Dorsey resigned last year and a long-serving engineer took over. But it seems to have been more of the same and it seems unlikely Musk will keep someone like Parag Agrawa in place when he takes over.

It’s important we give Musk his dues. I am a huge fan of Elon Musk. I doubt we’d get on in person, we might be a bit too similar in certain ways. I certainly wouldn’t be able to work for him and he wouldn’t be able to put up with me. But I admire that he has been consistently changing the world since the end of the 1990s.

Everyone knows about the impact he had at PayPal and how that changed the way we pay for things online. Most people understand the automotive industry would still be stuck in the heavily polluting era as Musk has almost single-handedly forced manufacturers to move towards electric vehicles. What’s more, he is a central part of the private astronautical sector, creating an impetuous which has resulted in not only SpaceX but also the success of other private space organisations.

The suggestion coming from people in the know is that Musk is proposing Twitter does a TikTok or YouTube, ie pay people to creator content on the platform to really give it a head of steam.

When thinking about what Musk might do with Twitter you might be tempted to think about Tesla – after all, that’s arguably where Musk has been the most successful in recent years, but I’d argue you’d be better looking at SpaceX because SpaceX is more of an arms-length concern, where Musk has appointed more senior leaders to fulfil his vision.

The COO of SpaceX is Qwynne Shotwell. Shotwell is a comparative old-timer at 58 when compared to some of the more youthful hires Musk has brought in. Whatsmore, Shotwell is something of a pro when it comes to working with the government and navigating the politics of the aeronautical industry.

Musk it would seem hates the kinds of politics that go with the kind of NASA contracts SpaceX needs to have. Musk sets the vision and rocks up to do the press etc whilst Shotwell gets on with the operational side of things.
If we think about Twitter – and social media more broadly – we’re talking about a platform that is hugely tied up in politics. We’ve seen various social media executives and lawyers dragged before legislative committees and courts. In order to deal with this kind of attention, you need someone who can deal with these kinds of situations. That is patently not Elon Musk.

I love who Musk hires. He hires people he thinks will get things done. Shotwell is an old pro in his field, but oftentimes Musk hires people who have no experience in their industry. They come in naive and find new ways to make things happen. I love that characteristic in people. With senior managers, I believe it’s the first three months in which you have an opportunity for the most change. This is what happened at GrowTraffic when Hannah came on board as a director in 2017.

Musk is going to need a good team around him. Twitter really hasn’t been a hugely innovative platform, which suggests there will be a hefty amount of inertia in the organisation.

Musk has already announced his intention to bring in innovations such as an “edit feature, an open-source algorithm, less moderation and a higher bar for removing offending tweets”.

To make changes Musk will probably have to be the CEO. But if Musk comes in and tries to make huge overhaul changes and create loads of new product features, there’s every chance the wheels will come off in terms of product use or there will be a regulatory slapdown. So whoever he brings in here will be important. My guess is there will be two new C-Level hires – one younger person with limited experience but who’s good at getting things done and one older person – may be an ex-politician – in the way Facebook brought in Sir Nick Clegg, to deal with the political fallout from more free speech.

Musk has referred to himself as a free speech absolutist and he’s been a vocal critic of the way Twitter has censored many accounts, including – let’s not forget – banning the former President of the USA, Donald Trump.

Let’s be clear though, Twitter used to be a cesspool of fairly toxic free speech – arguably it still is – but things do seem to have got better. We will have to wait to understand what Musk’s free speech absolutism means for Twitter. My suspicion is it will mean new technology in the form of algorithms, which will allow free speech whilst limiting the reach of hate speech at the same time. I hope it’s something like that and not an out and out Tweet fest where anyone can say anything.

If Musk is able to get this right and has this kind of idea in mind, I expect we will start to see a new blooming in the way all social media platforms deal with free speech, filter bubbles, hate speech, political manipulation, fake news and all the other huge concerns we have about social media.

In the product development cycle, there are a number of phases. We go from introduction to growth to maturity to decline. If you think about the social media platforms we have today, most of them are still in the maturity phase – TikTok is probably the only big platform out there in the growth phase.

In product development, we also see the theory of three generations of product development. Arguably, all the social media platforms we have today are the second generation. The first generation brings the concept to market (think Myspace), and the second generation perfects the idea. The interesting thing is the third generation comes along and takes it in such a different direction it essentially becomes the first generation of a new product, which all the other competitors follow. This is what Musk is outstanding at doing. If he gets this right, I predict he could start a revolution that would change social media in ways we’ve never even thought of.