How Should Businesses Show Black Lives Matter To Them? 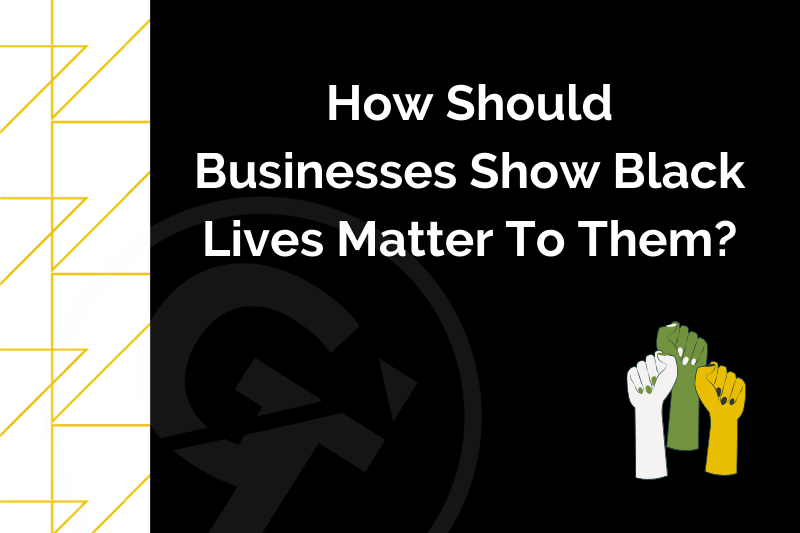 The death of African American George Floyd under the knee of a white police officer in the US has triggered rounds of protests throughout the USA and in other parts of the world. Brands around the world are trying to find their voice in this issue and there has been some painful missteps and too much awkward silence from some of the worlds’ biggest brands.

There is no doubt that the US has a huge problem with racism, borne out of centuries of slavery and segregation. I was brought up in the 1980s, in an era where racism was alive and well. I received various racist tropes early on – hopefully, I’ve unlearned most of those over the years – but the level of segregation, intolerance and fear in the USA is something far beyond my experience in the UK. Of course, our language is loaded with racism and we can see the BAME community over-represented in low paid and low-status roles. We so much more to do.

Admittedly, I’m a white man with little understanding of what it’s like to be anything else. It’s also notable as an SEO consultant when I look around at my fellow consultants in digital marketing, there isn’t a great deal of BAME representation. Our industry has more to do.

As two of GrowTraffic’s directors have racially and culturally diverse backgrounds, I would like to think that colours some of how we think and act in this arena. But I’m sure we have more to do.

There have to be some changes in regards to racial prejudices and discrimination, especially in America but also in the rest of the world. And this feels like the right time to be making noise about it and agitating for it. As a brand, I believe GrowTraffic shouldn’t shy away from the issues at hand, but sometimes you’ve got to take a minute to question where the line is, how your business will be perceived for backing a protest movement and perhaps worse still for a marketer, how with the best intentions, you could get it monumentally wrong.

Over the past week, we’ve seen people around the world standing in solidarity on the streets but also on social media, and many brands have done the same. On Tuesday we saw blank black images being shared on social media to market #blackouttuesday. It’s great that brands got involved. But some got it wrong. Because they lacked authenticity and seemed less than genuine.

You’re probably feeling that pressure to make some kind of statement on this matter and/or get involved. You might even want to. If you’re lucky, the sentiment behind the protest is so intrinsic to your brand that when you post about it, it screams authenticity. Most brands won’t be so lucky and are rightly wary. And it’s those brands that can find themselves coming unstuck when it comes to allying themselves with the Black Lives Matter movement (see the L’Oreal backlash in 2017).

One of the reasons you might want to think about whether your foray into the Black Lives Matter space is; if you aren’t saying anything meaningful or aren’t using your weight in anything more than an inane ‘jump-on-the-bandwagon’ type post, you are just taking up space that could be used by someone or an organisation that is actually trying to make a difference.

This is a time for those businesses and brands that already advocate the black lives matter movement. So perhaps the first question you should ask yourself about getting your business involved in the Black Lives Matter Movement is not “How can I get involved” but “is this genuine to our culture and ethos?” If the answer is no, then you need to have a think about whether it should be. If it is part of your culture, the next thing you need to be thinking about is whether it’s part of your brand. And there is a difference between the actual culture of a business and the perception of the brand.

Rather than just jumping on the bandwagon, start looking at your own business and advocate making a difference. This might be easier if your a business owner or CEO but if you’re a marketing professional then you might have to do some convincing. But if you can get some positive movement in terms of donations to the movement, or agreement to bring on a new black board member, or getting free services for the black community, these would be great wins that you can do some marketing around. This demonstrates your brand has considered the problems and the problems within your own organisation and you’ve actually done something about it. Now that’s good marketing and PR and it’s the type of positive action that won’t produce blowback, which is what every brand should be wary of right now.

It’s not just about messaging either. Ask yourself whether you can feed this into your PR and content marketing strategy. You should have proof in existence on the internet prior to supporting a movement because you need to provide readily available content that’s indexed in Google which will be found by sceptical consumers and members of the protest movement. Fail to take this step and you’re on a hiding to nothing and you could find yourself back peddling.

Whatever you do, we are of the opinion this is a turning point in race relations and an opportunity for organisations and brands to be on the right side of history. Just do it well, be genuine and authentic, and ultimately make a positive and lasting impact. That’s more important than slogans.

How Should Businesses Show Black Lives Matter To Them?