How The Alphabet Workers Union Could Affect SEO 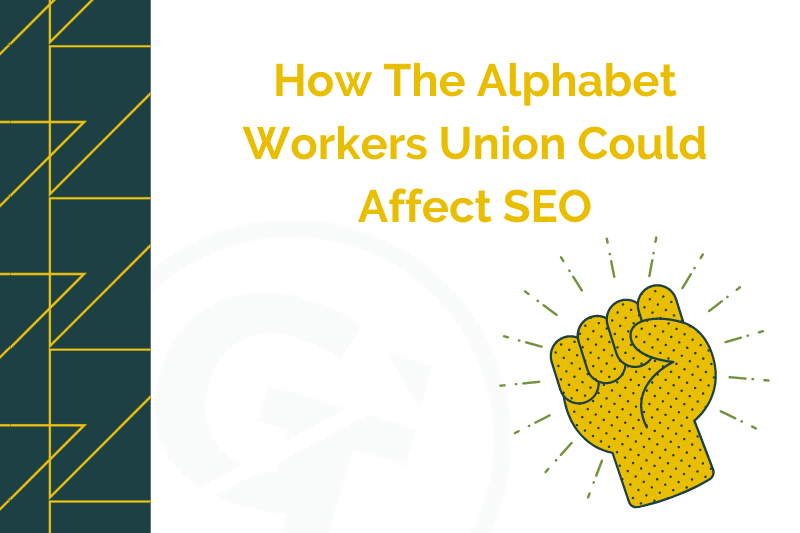 Recently Google’s staff have announced they’ll be forming a new union to come together in solidarity to begin to change their relationships with the tech giant and the direction the company is taking.

The New Union At Google

The new union at Google was announced in the New York Times. Googlers are a smart bunch and they don’t mess around, this is serious PR! The announcement said the new union was created because of concerns over the ways discrimination and harassment in the workplace have been dealt with, but also because of some of the controversial things Google has been getting itself into, including the use of AI in military technology, such as Project Maven, which saw employees publically criticising the company. The Googlers’ fear Skynet as much as I do!

“The past few years at Google have been tumultuous: secret military AI projects, multi-million dollar payouts to execs who sexually harassed our coworkers, profiting from hate speech, & more.

Coworkers who’ve voiced concerns have even been fired, illegally, as retaliation.”

It turns out Googlers have been working on their new union for around a year and it’s forced Kara Silverstein, Google’s director of people operations to announce they’re going to engage directly with their employees. I note the word directly here…

The new union is going to be called Alphabet Workers Union (Alphabet being the name of the Google parent company) and they’ll represent all the workers under the Alphabet banner, so not just Google but also brands such as FitBit, Waymo etc. At this stage of the union’s development, they don’t intend to try to get new contracts between Alphabet and the workers but rather they’ll represent the workers and organise them where necessary. So they’re acting much more like a UK-based union than a traditional US union.

This is how the union put it on their website: The Alphabet Workers Union will be the structure that ensures Google workers can actively push for real changes at the company, from the kinds of contracts Google accepts to employee classification to wage and compensation issues.

So far the union has managed to get one military contract cancelled and had all staff earn a minimum of $15 per hour. Not bad going!

How Will The New Union Impact On SEO?

We can expect this is going to change Google. It’s going to see Google soften a bit and become that bit more transparent in how they do things. I anticipate this will find its way into how it communicates its activities with search and how it communicates things like changing algorithms. To be fair, we’ve seen over recent years Google has been more committed to transparency. Just expect this to go further.

When Google was set up, they had a motto: Don’t be evil. They’ve slightly rephrased it for Alphabet to “Do the right thing” and they’ve made the Don’t be evil motto less prominent in Google’s code of conduct but maybe it’s time the Alphabet Workers Union insists the company return to their original undiluted ethos.

How The Alphabet Workers Union Could Affect SEO