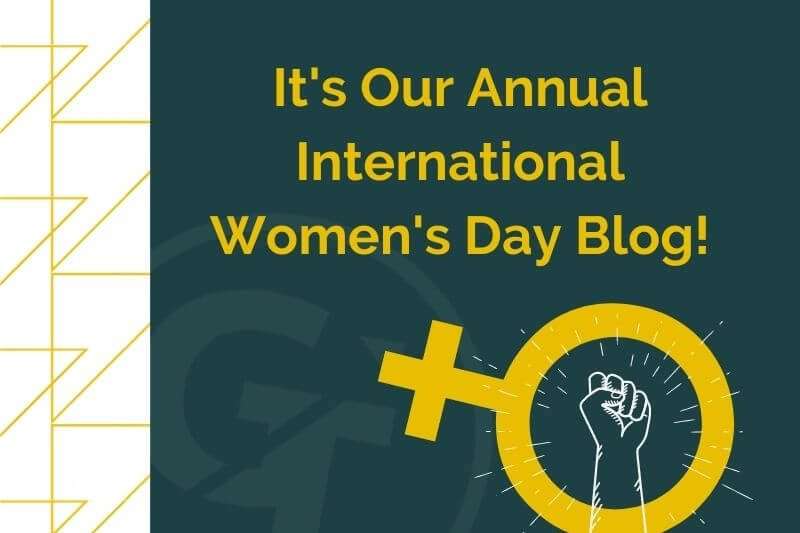 Today is International Women’s Day; an annual event that celebrates women. Because, you know, just over half the global population obviously needs one day in every 365 to celebrate their existence.

Nevertheless, here we are. And, as GT is a predominantly female search marketing agency, every year we mark the day with a blog. Well, content marketing innit. You’ve got to do what you’ve got to do.

What Is International Women’s Day?

International Women’s Day has been celebrated in one way or another for over 100 years; the origins of the event can be traced back to 1909. However, it was in 1977 when the United Nations officially adopted it as part of their calendar of annual events.

Now a globally recognised day, celebrations around the world vary from country to country, with some marking it as a national holiday and some using it as a day of protest (and some completely ignoring it. Who needs women anyway?! Pft!). Generally speaking, though, this is mostly an international day, when women’s issues are put front and centre.

Whilst we’re incredibly privileged in the UK to not necessarily need a specific day for women (that’s not to say that the UK has achieved complete gender equality – far from it), in many countries around the world IWD is one of the few times where women’s rights can be legitimately raised and discussed.

Even here in the UK, though, IWD has become a more significant day in recent years, and now seems to be acknowledged by everyone from the media, to businesses and even in schools. Well, it’s a chance for more marketing, of course. You cynic.

One of our lovely clients was telling us last week (as we delivered their IW blog), that IWD is a complete con, and I can see her point. Why do women need a single day to acknowledge their existence?! It does seem counterproductive and, quite frankly, patronising. It’s a bit like entirely female networking groups – women shouldn’t be segregating themselves off and making themselves ‘other’. We should be competing with men in their own space. I get it; I’ve had those feelings of queasiness.

But, as I’ve already said above, we speak from a position of privilege here in the UK. We probably don’t need IWD, sure. But many other women around the world clearly still do, such as all the women in Saudi Arabia living under male guardianship.

Also, if we bring it closer to home and look at the sexism still inherent in the search marketing industry – our own sector – then the need to spend a day pointing out the inequalities becomes obvious again. Not that we restrict it to one day. In fact, I feel like a broken record on this subject. But today I write it down and tell it to you, too.

Why Does International Women’s Day Matter To GrowTraffic?

In stark contrast to many in search marketing, GrowTraffic is – and always will be – a feminist company.

There are currently 6 of us on the GT team, spread across Lancashire and Yorkshire – Me, Hannah, Elicia, Chloe, Blythe and (Simon) Dalley. Five of us are women. All of us are feminist.

GrowTraffic was started by a man 12 years ago (in 2009), yet we have been a predominantly female company for 4 – 5 years now. In that time, we have faced much sexism, such as from the numerous (male) clients who were argumentative and belligerent when Hannah or I speak to them, yet total pussycats when Simon Dalley took over dealing with them. That stings, yet sometimes it’s easier to just roll with it for the sake of an easy life, rather than keep battling it.

Also, the online world generally is phenomenally biased towards men (don’t even get me started on Incels and social media trolling – the internet can be a dangerous place for women!), and search marketing is no different. So, as a feminist digital agency, the GrowTraffic gang feel it behoves us to speak up about it.

Well, you’ve got to have something to rage against, haven’t you. This is our thing.

Why Is SEO Such A Sexist Industry?

So let’s bring it specifically back to SEO.

The rumours of SEO being a particularly sexist industry have been rife since the dawn of time and, as a women working in the search sector, I can confirm that this industry is incredibly male dominated. It’s something we discussed in one of our FFS! (Friday Facebook Sessions) a few weeks ago.

According to a recent article by Moz on the Gender Gap In SEO, men outnumber women by more than 2 to 1 in SEO. From my own experience, I can certainly verify that. I have met many people on the networking scene in Lancashire who do SEO. Not a single one of them is a woman.

The article goes on to explain that, those women who do work in SEO, tend to be freelancers as opposed to agency employees. The upshot of that, of course, is twofold; firstly, freelancers generally tend to be lower paid than their agency equivalents, so if women are freelancing whilst men are working in agencies, the gender pay gap for SEO will be bigger.

Secondly, if women are removing themselves from the employment pool by freelancing instead, then men will be the ones working their way up the promotion ladder to positions of power. The people who make decisions and speak for the industry (those who are asked to speak on panels, write guest blog posts etc.) tend to be Managing Directors and CEOs; if women are leaving to freelance, then they’re not reaching those positions and therefore are not being invited on to panels or to participate at that higher level.

I get it. I understand why women leave to freelance; I’ve done it myself. Women need the flexibility to work around childcare and, quite frankly, why should they put up with all the bullshit of being at the mercy of the dick-swinging males who tend to run digital agencies, when they can do it by themselves and earn almost the same amount of money.

But, if women keep opting out of playing the game, then we’re never going to have a seat at those tables of power. And then nothing will change. And things really need to change.

There are hundreds of thousands of women working in SEO, and their world – our world – is so much nicer and more collegiate than the one the men inhabit. Just take a look at some of the SEO groups on Facebook; the female led ones provide a space where knowledge is shared freely and willingly. They are generally positive spaces.

The male-orientated groups, by contrast, are full of snark, put-downs and passive aggressive (or sometimes downright openly aggressive) dismissals. They are negative, toxic places where you have to wade through literally hundreds of “fuck off dickhead” comments before you find the one useful comment that might help.

In one such group recently, in answer to the question “what’s the worst thing about the SEO industry”, Hannah responded with “the sexism”. Cue an awful lot of mansplaining, ‘not all men’, ‘you should smile more’, ‘maybe try working somewhere else’ (because she, a woman, couldn’t possibly be the Director of her own agency), and generally lots of men jumping in to explain how her lived experiences must be wrong. Literally, the eye rolling nearly killed us. This is a screenshot of just some of the responses – and these are not even the worst ones…

It’s hardly surprising that the vast majority of women just say ‘nope, not dealing with this bollocks’ and go sit in their own group. With fun and laughter…and wine.

But ultimately – although nicer – this is not helpful. So, how do we stop women from removing themselves from this toxic masculine environment and just doing SEO quietly and happily, by themselves? How do we ensure we get more women to enter SEO in the first place, stay there, rise to the top and speak out?

I don’t know, unfortunately. I don’t have the answer. But I’m going to keep on talking about it to anyone who’ll listen until we come up with one.

What Will GrowTraffic Be Doing To Mark International Women’s Day?

And, on that note, I’m looking forward to my IWD today, where I can shout about gender equality all day long. I mean, to be fair, I do that anyway, but today people actually have to listen to me!

That’s why the GT team will be doing quite a few things today to mark this momentous day of women.

First up, we shall be doing the #ChooseToChallenge sign and posting our photos on social media. Make sure you follow us on Facebook to see all the images from today. 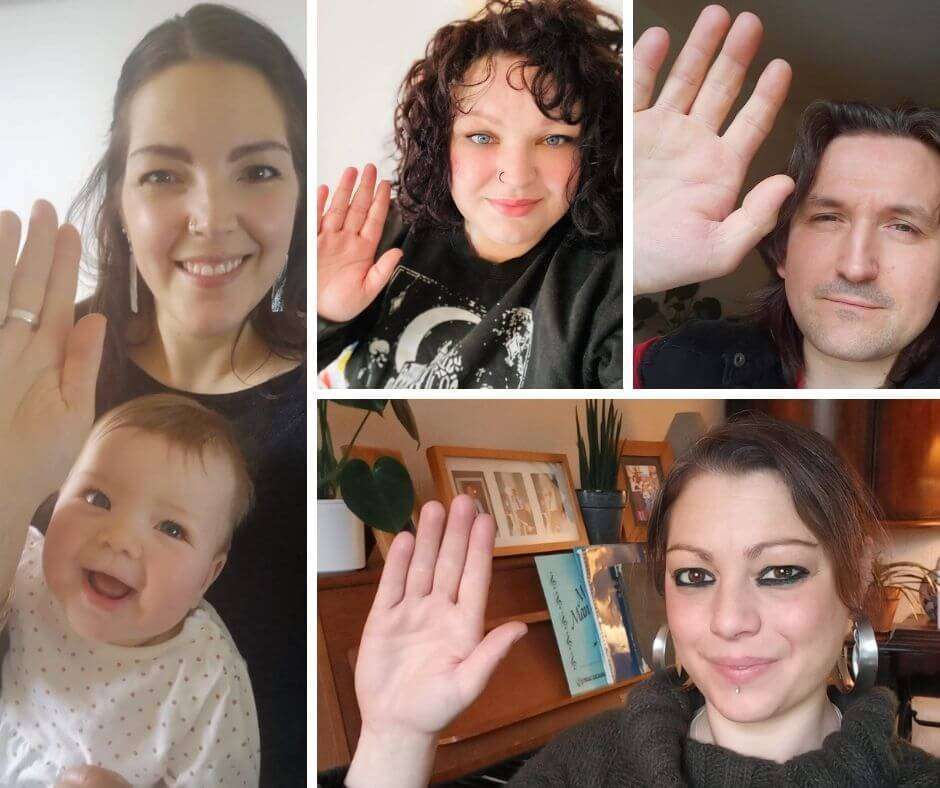 Secondly, at 16:00 this afternoon, Hannah and I will be going live on our Shooting The Sh!t – Feminism + Business channel, where we’re going to be chatting with our feminist friends about how women around the world, particularly women of colour, are striving for equality. Make sure you join the Facebook group to watch it – all genders welcome.

Thirdly, I will be on Rossendale Radio at 15:00 this afternoon to talk about Rossendale Soroptimists and our new award – the Woman For Women Award – launched in conjunction with Rossendale Radio. We’ll be recognising a Rossendale woman who has made a significant contribution to improving the lives of women and girls locally. (And come on, you didn’t seriously think I’d get through an entire piece of content without mentioning the Soroptimists, did you?!)

And, last but not least, we’ll all be noisily and disruptively fighting the patriarchy from our own homes (thanks to the Coronavirus pandemic, which, in itself, has had a major impact on the lives of women around the world. But we’ll discuss that another day.).

As I mentioned above, as a woman in SEO, I feel it is my duty to push myself forwards and try to get a seat at those tables of power. Which is why, in the coming year, both Hannah and I will be seeking out speaking slots at expos and conference panels, getting ourselves on podcasts and live streams, writing guest blog posts and articles, and generally doing everything in our power to ensure the voices of women infiltrate the male dominated world of SEO.

And we’ll be doing it all whilst also running an award winning digital marketing agency, trying to steer our families through a global pandemic, doing the majority of the childcare and housework, and making sure we don’t bruise the egos of the male SEOs around us. Easy peasy.

If you’d like to join the best feminist search marketing agency in the world, then why not get in touch with us? We’re hoping to recruit in 2021, so we’re always happy to hear from content marketers, copywriters, SEO specialists, or just anyone who thinks SEO is da bomb and wants to master the algorithms.

Alternatively, if you’d like GrowTraffic to work on your digital marketing campaign – with tried and tested strategies that actually get you an ROI and increase the traffic to your website – then simply get in touch with us. You can phone us on 0161 706 0012 or email [email protected].

And if that’s a step too far for you yet, you can just sign up to our hilarious fortnightly newsletter and follow us on Facebook or Twitter (or any other social media platform you like – we’re on all of them!). I promise, you won’t regret it.