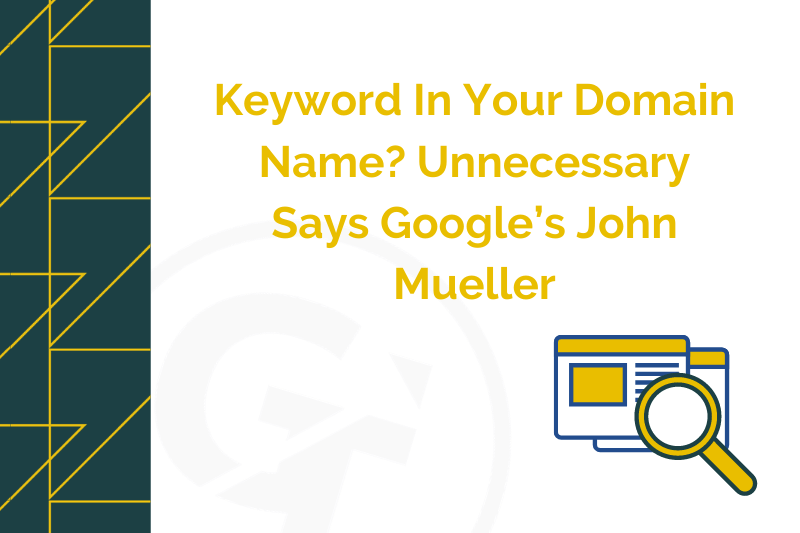 In the latest Ask Google Webmasters video, a question was featured about keyword-based top-level domains (TLDs). John Mueller said in the video there aren’t any benefits from featuring a keyword in domain names when someone posed this question:

Does a .jobs domain improve ranking in Google for jobs?

Responding to the question, Mueller also confirmed keywords in your domain name, generally, won’t have much of an impact on website ranking.

First up, responding to the question about TLDs, Mueller said:

“This is a really common question that comes up for the new top-level domains. In short, no. You don’t get a special bonus like that from having a keyword in your top-level domain.

Anecdotally you can see that by searching naturally for anything that interests you.

I’d venture a guess that the top results don’t have those keywords as a domain ending. Often it’s not even in the URL at all. That’s by design.”

Pretty clear cut then that there is no benefit from a keyword-based TLD…but what about elsewhere in the URL?

The relative had read a couple of SEO articles and considered himself sufficiently educated to inform me that by simply naming your business after your main keyword and using it in the domain name, you could ‘trick’ Google into ranking you on their first page.

Yes, it was very funny but the belief that a keyword domain is important persisted even in the industry for a while.

Search Engine Journal wrote a good explanation on keyword domains back in 2018.

There Still Isn’t Any Ranking Benefit to Keywords Domains

Mueller carried on in response to the original question about keywords in TLDs to reaffirm that a keyword in a domain name won’t make a site rank any better for that keyword:

“Just because a website has a keyword in its domain name doesn’t mean that it’s more relevant than others for that keyword. In short, you don’t need to put keywords in the domain name.”

However, this does contradict what some ranking factor studies still say about keywords domains – hence my relatives’ confusion when I told him that it wasn’t a good strategy to base your business /domain name around your keyword.

SEO consultants know there are numerous factors to consider when working on an SEO strategy and there is no easy way to ‘beat the system’.

In the video, Mueller went on to say that there could be disadvantages from trying to shoehorn a keyword into a domain:

“From a practical point of view, it’s worth also keeping in mind that businesses evolve over time, and moving domains is hard. So it often makes sense to pick a domain name that you can use for the long run and not necessarily one that just matches what you’re offering today.”

With plans to expand into other services in the future, I advised him having such a specific domain name was a bad idea, not only for his brand but because when more diverse content and services were uploaded to the website that didn’t reflect his very specific keyword domain, the mixed signals his site was sending out could harm his Google rankings.

I advised him to choose a domain name to reflect his long-term goals for the company.

“Instead of spending too much time on the domain name, or the top-level domain name, focus instead on building a site that you can continue to use for the long run.”