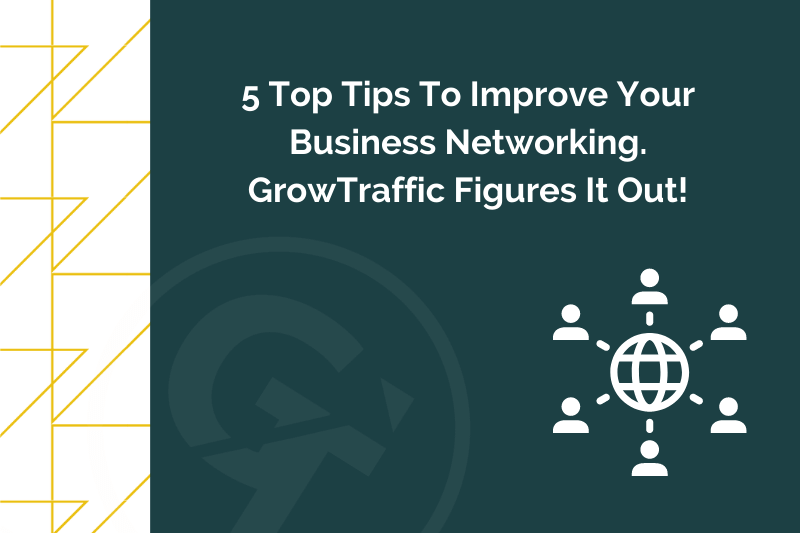 In this week’s GTFO (GrowTraffic Figures It Out) Rachel was joined by a special guest, Liam Mulligan, to discuss their 5 top tips to improve your business networking.

The panel might have been short this week, but the content didn’t suffer. It was a nice intimate chat about the importance of networking. END_OF_DOCUMENT_TOKEN_TO_BE_REPLACED

We’re pleased to announce GrowTraffic is now a member at the Ramsbottom Breakfast Over Business Club, which meets at The Lounge in Ramsbottom every other Wednesday at 7am. END_OF_DOCUMENT_TOKEN_TO_BE_REPLACED

How much business networking do you do for your company?

I wrote a blog way back in 2015 entitled The Power of Networking, which was about how GrowTraffic had recently started networking in the Rossendale Valley, having moved to the area a year or so earlier. It wasn’t a new venture for us, as such, because we’d done networking previously in other areas, but it was a bit of a revelation to find a community in our new locality that was so much more switched on to the benefits of networking than we’d encountered at our old one.

That’s why, since I wrote that last blog in 2015, networking has become a central pillar of GrowTraffic’s sales and growth strategy, and it’s something that all of the team take part in on a regular basis.  END_OF_DOCUMENT_TOKEN_TO_BE_REPLACED