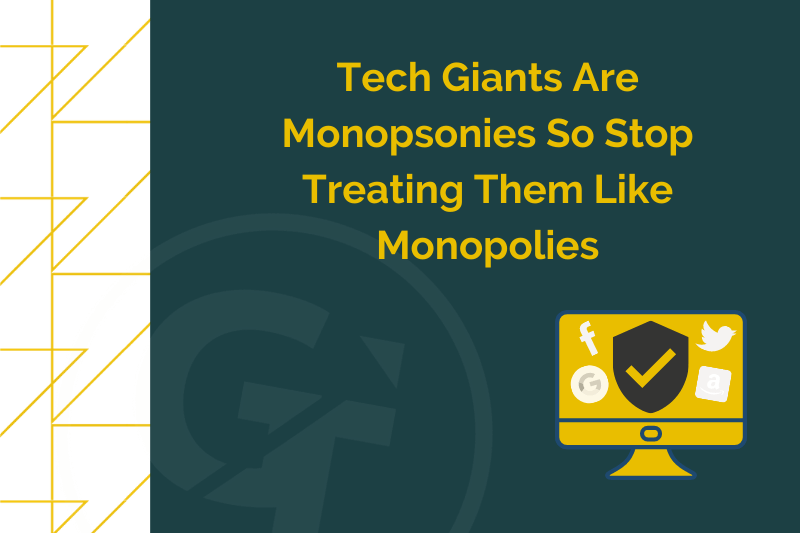 Over the last hundred years, politicians have been wading into economics and breaking up businesses that have become too big – by becoming monopolies – and lots of laws, regulations and policies have been devised around this. But we’ve entered a new era and in that era, the popular board game we all play once every couple of years wouldn’t be called Monolopy, it would be called Monopsony.

In industrial history, most businesses have become monopolies in terms of them growing to the point where they are the only seller, however, in terms of employment they could often be considered a monopsony because they would tend to become the only or the biggest employer in a town.

Over the course of recent years, we’ve seen countless senior execs from some of the largest tech giants in the world dragged before the legislatures of various governing bodies. These have no doubt been show trials but it’s got to be seen as a direction of travel. Legislatures want to get control over these new transnational tech companies and they are trying to come to terms with how they should do that. I believe the main problem is that many legislatures are geared up to deal with monopolies, but not monopsonies.

Why Are Tech Companies Monopsonies?

Monopolies are generally seen as being negative for consumers because they control the prices consumers pay. In the age of the tech giants, consumers don’t pay for their services and this is key to understanding why tech giants are monopsonies and not monopolies.

When we think about tech giants we generally think about the way their users use their platforms. Most of those users are consumers but the users we should be focusing on are the advertisers because that’s how the tech platforms usually make their money.

We also have to understand that the consumer is the seller in this scenario, not the tech giant. In this scenario, all those billions of consumers using Google are providing Google with their data in return for the goods and services associated with search engines that Google provides. In this sense, there is only one buyer in the market and that’s Google. Google then sell the ability to target the consumers, but not because they are just a monopoly (and arguably they are this as well) but because they provide access to the consumers.

It’s the scale of users that should make you think of them more like a monopsony and less like a monopoly though. That’s because there are hundreds of thousands and millions of advertisers using the targeted advertising from the tech giants, but there are literally billions of consumers using the system. They are the main ‘buyer’ for that kind of consumer data, the fact that they’re the main seller of that data (or at least access to those data sources) is inconsequential really.

In a fair market, the consumer pays the lowest price possible for a business to provide a product or service, make a small profit and make enough money to acquire new customers.

Monopolies are unfair and inefficient businesses, they mainly lead to increased prices for consumers, which translate into excessive profits for businesses and preventing competitors from entering the market.

Monopsonies hide the true cost of running a business, they drive the cost down for consumers. When you think about the likes of Google and Facebook those prices are virtually non-existent – they provide their services to the consumer for free.

One of the main problems the tech giants can’t be broken up using traditional monopoly legislation is because they don’t act in anti-competitive ways. In the old days, a monopoly would use their scale to make sure no one else comes into the market. The tech giants don’t do that. There are literally hundreds of thousands of booksellers on the internet. There are – even now – thousands of search engines. There are hundreds of social media platforms. With monopsonies, the problem isn’t competition, it’s competitiveness. That’s because large tech firms acting as monopsonies attract consumers – who remember, are effectively their suppliers – due to attention and convenience, not from reducing the cost – because they already charge nothing to the consumers, to begin with.

In a traditional monopsony, suppliers reduce the quality of their products and services to the monopsony. I wonder whether the reaction to the data scandals at Facebook is the begining of the new tech monopsonies’ reckoning where consumers realise they are effectively the suppliers of these firms who now realise they have been too ready to give too much of themselves away in return for the goods and services of the tech giants.

Perhaps the key way legislators can start to deal with the monopsony power of tech giants is to force them to start introducing charges to consumers for using their platforms. Imagine a world where people actually pay for the tech they use?! It seems crazy now, but should it seem that way?

Can PR Benefit My SEO?