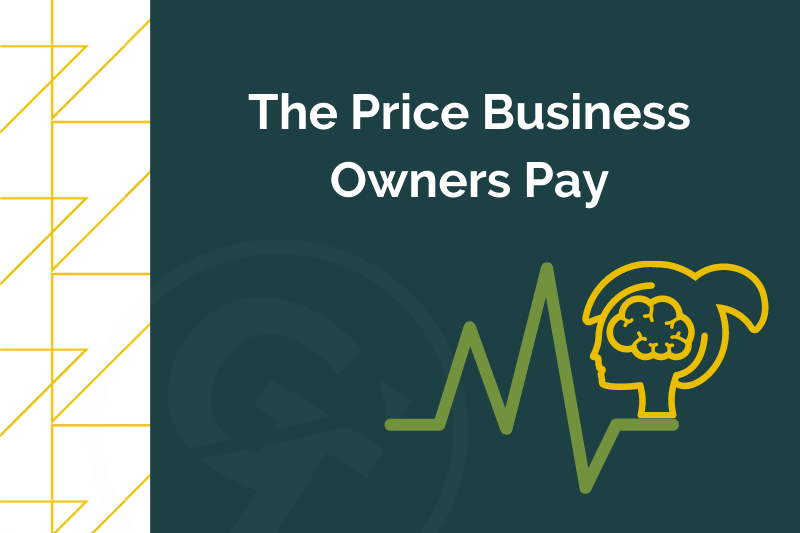 Growing a business isn’t easy and I think even the most resilient business owner will have experienced the ups and downs during the last 6 months or so, but in reality, many, if not most founders and business owners find themselves shouldering a huge psychological burden.

Just a handful of years ago GrowTraffic was on its knees; we’d lost the majority of the clients we’d built up over previous years or two – for the second time – our client base came and went, and I was working in a fulltime corporate marketing role wondering how I would ever get GT generating inbound leads in the numbers it used to. All that time I was advising GT clients on how to generate traffic and clients from SEO, nodding and smiling, and generally filling them with confidence that I knew how to make it work for them.

Most of the clients I worked with at the time were in pretty desperate positions. They had to make it work and they were looking to us to get it going for them. Though I knew how to generate traffic for them, I was sat there thinking I’m not generating enough enquiries myself to make this work as a fulltime project that I could leave my senior marketing management function.

I’d rebuilt GrowTraffic’s client-base after handing it over to one of our previous consultants, whilst I explored my career in corporate marketing and then I’d let it dwindle. But there was a bit of me that questioned if I could do it again. This doubt was reinforced by the changes that had taken place in Google and the unconfirmed penalty I am fairly sure our website had suffered following my very successful if slightly grey SEO tactics.

After several years of my own anxiety, the monumental efforts of Rachel, Hannah and all those early GT employees, my salary from my corporate marketing roles to support the business’ growth and hours juggling my everyday roles with the requirements of clients past and present, we began to make headway.

We tend to lionise business owners who against the odds are able to bring something into being. I’ve read all of Ricard Branson’s autobiographies, I’ve read about Steve Jobs and I’m willing Elon Musk to succeed in anything and everything he sets out to do.

The thing is every one of those experienced a vast amount of anxiety. Every one of those lionised entrepreneurs saw their business and lives crumble, at least in their nightmares. They all woke up in the middle of the night and wondered what they should do or found themselves faced with moments of doubt.

It is a very recent phenomenon for people – especially business owners with others who depend on them – to admit when they are experiencing psychological problems. Most don’t really express how we’re feeling. I saw we; because I am happy to show those feelings, that’s not to say I’m not completely fucked by two decades of corporate bullshit and over ten years of seeing the ups and downs of a business. I am as a mess.

I’m like one of those cowboys who’s able to ride an out of control stallion and get it to go in the right direction. It’s just the audience can’t hear the internal dialogue: “How am I going to get off this thing.”

And let’s be frank about it, there are a lot of people who have experienced the kind of mental health issues that have resulted in people taking their own lives – even when from the outside things appear to be going well. I myself have so much conflict and that can result in suicidal thoughts from time to time.

It’s really heartening to hear so many founders and entrepreneurs speaking about mental illness in recent years. It seems to be a hobby horse of certain members of the royal family too. We’ll see how that helps.

Everyone can feel down but it’s a common theme I hear amongst the founders and owners of businesses, with so many of us out there having to deal with anxieties and moments of despair. Everyone can suffer from different kinds of moods but it does occur to me that people who set up their own businesses may be more inclined that way, because they aren’t quite the same as other people and maybe those desires and anxieties play into that.

For me, founding GrowTraffic was all about creating an illusion of more control over my life and it was a direct consequence of redundancy and the impending birth of my son. I realise now that that’s an illusion and also the bigger things become and the more complicated they become, the less control you can ever have over your own life. You can just steer the bark of this endeavour in the direction you think best and hope you get there.

And we’ve had it all at GT over the years. There have been so many setbacks. We’ve had highs and then faced the lows, we’ve lost great customers we’ve had for years, we’ve seen the market changing, seen competition exponentially grow, struggled to pay the wages, been through the depths of a global pandemic and had staffing issues to deal with. It’s both fun and liberating and exhilarating and downright traumatic, and most of us are going to be damaged in some way or another by the process.

I’ve spent a lot of time talking to small business owners over the last year and I can see the same self-neglect going on in them that I see in myself. We’re talking about a group of people who don’t eat properly, don’t sleep properly, drink too much, exercise too little and generally work around the clock, pushing themselves (OK abusing themselves) for that little bit more. The thing is, you just end up susceptible to being moody, cranky and difficult. And it’s a vicious circle.

That’s not to say you don’t have to work like a dog, because most business owners do have to work around the clock from time to time. I’ve known many business owners who have worked like that for decades. For most, it’s that dedication and passion that is going to make them achieve what they need to achieve. You’ve got to be a bit obsessive and with those kinds of traits, there are always downsides.

I know I am a highly-flawed individual. But I also recognise the pitfalls are generally the things that have made me achieve more than a lot of my contemporaries. They continue to drive me now when others would back off and go for a quiet life. I think the problem is, in toxic corporate culture and when building a business, these things are amplified further.

I do wonder if getting down from time to time is part of the entrepreneurial life. I might be doing this a disservice by saying “getting down” – perhaps a better way of framing it is raging depression, overwhelming anxieties and extreme stresses. There has to be something about business owners that’s the same even though they come from across the spectrum because they’ve all put themselves into that position. They’ve selected themselves for this role. In the words of Ozzy Osbourne: “You’re all fucking mad!”

When you set up your own business you create a perception of yourself for yourself and it’s easy to get caught up in that. You make things happen and then all of a sudden something happens and it’s brought home to you swiftly that you’re not the kind of master of your own destiny you think you are and despite keeping smiling on and through, you can find your confidence has gone south closely followed by your business.

Confidence is important but you will often find that you feel like you’ve bitten off more than you can chew. That you’ve got too much on your plate and that something could happen at any moment. I think I am still dealing with that redundancy in the last recession that spurred me to create GrowTraffic in the first place.

My anxieties have grown over the years and I can only equate it to PTSD. I mean, I’ve been made redundant three times, I’ve been reshuffled a couple of times, we’re on GrowTraffic version 5 at the moment. It all comes with a cost.

It’s essential that business owners find ways to focus on things outside of work too. It’s more difficult in GrowTraffic’s case because I’m married to Rachel and Hannah is my sister-in-law, we have very little shut off from it in a familial sense. But it’s important to find ways to turn off from the stresses and pressures of it all.

I suppose the key is recognising when to work on it. I started my journey to try to repair some of my mess late last year. Over the last year, I’ve developed various coping mechanisms. I’ve worked with a PT to get healthier, a business mentor, a counsellor, an NLP specialist and I’m just about to spend some time every month with a mindset consultant. There’s a lot more work to do and no doubt I’ve got the COVID crisis trauma to factor in too, but I feel like I’m making progress for the first time in a long time.

It’s essential that your people get you and aren’t just terrified of how you are. Be vulnerable and tell them what makes you do the things you do. It’s what has shaped you and the business they are working for. It’s as much a part of their experience as it is yours and people will make allowances and help you through.