What Made Google The Biggest Search Engine? 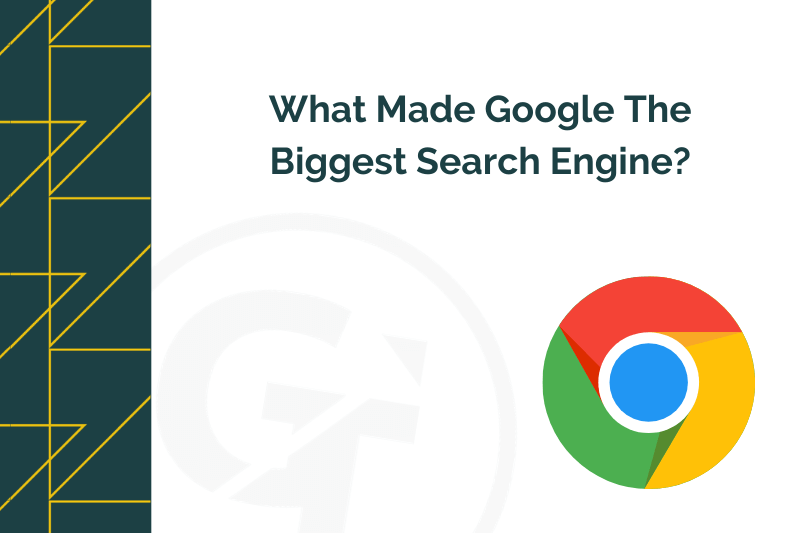 Google is, without a shadow of a doubt, the biggest search engine. You’ve probably used it at least once today already. Google is so big and so well know that it’s even in the Oxford English Dictionary as a verb! (Fun Fact: Google was first used as a verb in an episode of Buffy the Vampire Slayer and it became a welcome part of our vocabulary. Is there nothing she can’t do!?)

As a child of the late 90’s, however, I have never experienced a world without Google. The search engine behemoth has always been a feature of my life. It’s such a household name and staple of modern living that I couldn’t help but wonder, what made Google the biggest search engine?

How Does Google Work?

As more and more content was being added to internet, it was becoming increasingly cluttered and almost impossible to find anything, Google’s original function was to act as a giant filling cabinet, neatly sorting away all the websites and web content we fed it. Unlike the filing cabinets of old, however, Google did things a little differently.

Google started creating algorithms to help sort and organise the web content. Google used these algorithms to, essentially, score the web page on its content. The algorithms took into account certain things on the web page, like inbound links, keyword frequency and page titles. This then resulted in a page rank that determined when and where a site would appear in a search.

It was because of these algorithms and page ranks, that Google was able to efficiently and neatly categorise its content. It made it easier to search for things and get results, something other search engines at the time were still working on. Thanks to its innovative design and efficient algorithms, Google became everyone’s favourite search engine and raced ahead of its competitors.

When Did Google Become Such A Big Business?

Algorithms are cool and all, but I don’t know if they are worth the $168.6 billion in revenue Google makes a year. That’s where monetization comes in to play. Google introduced Adwords, a feature that had advertisers pay for impressions, instead of the usual clicks.

Google Adwords didn’t take off immediately, but Google is also very good at tweaking and testing its products until they have the best possible outcome. In fact, they are still tweaking the Google search engine algorithms to make sure it’s the most innovative and efficient search engine out there.

Google quickly turned Adwords around into a pay per click system and soon the concept of digital advertising was changed forever. Google was able to use this to not only sell space to advertisers, but also branch out and offer relevant adds. More ads meant more revenue for Google, and it’s because of systems like Adwords that Google was able to dominate the world of digital advertising.

How Did It Get To Be So Big?

At this point Google has touched pretty much everything there is out there. From Emails to videos to gaming to maps, Google has had a hand in every one of them. Google knew that the more web content you had, the more space there was for advertisement and the more advertisement there was, the more money could be made.

Not all of Google’s ventures were driven by profit, however. Google doesn’t work unless people are using it and as a result it has always had a strong relation with its users. Many of Google’s ventures, such as Gmail or Google Maps, focus much more on being a free and useful product than selling ad space. In fact, Google Maps and the subsequent Google reviews feature focus heavily on small businesses and how you can help them.

Google knows from experience that the best way to perfect a feature is to test and tweak it. Many of Google’s assets are either an already popular site that they have taken and perfected, or an original feature that they have beta tested and tweaked.

What Have We Learned?

Get in good with Google! Google is undisputedly the biggest and most successful search engine out there, so if you wanna do well, do well on Google. By using the right SEO techniques, it’s easy to tick all the boxes on Google’s page rank algorithms. By simply using frequently occurring key words and cleverly using links you can create the perfect web page that is just the kind of web content Google is looking for.

What Made Google The Biggest Search Engine?