Why Digital Marketing Agencies Should Lead The Way To Work Local 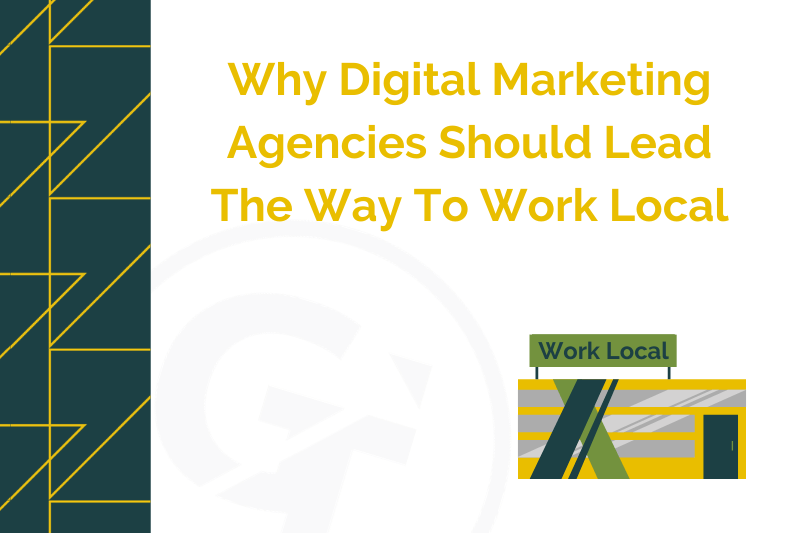 Over the last few months, we’ve seen a huge section of the economy move to a homeworking model as part of the COVID-19 lockdown and we’ve seen it can work. But for most people, it’s just a temporary working pattern and many don’t necessarily want to work from home fulltime, but still want to enjoy some of the benefits they’ve experienced. I believe a halfway house between full homeworking-for-all and city-centre working can be found in the Work Local movement and I believe the digital industry is ideally placed to champion the work local movement.

When GrowTraffic grew beyond a business that was just me, it first moved to a phase where I used a number of freelancers to deliver the work for me. We all worked from home and it worked well for several years, but inevitably with GrowTraffic being my side hustle, I got too busy in my fulltime role and it soon became time for someone to work on GrowTraffic fulltime.

To begin with, the first full time member of the team was Rachel. Rachel is my wife and had recently stopped working for the NHS as she had a back condition that made working in an office environment fairly difficult. It was great timing in many ways. Rachel was able to continue much in the same vein I had, but we had the additional capacity of a full timer. Everyone was working nicely from home.

Over the years we had always had problems working with freelancers, for a number of reasons. For one thing, they are notoriously unreliable. It was unusual for your best freelancer to go AWOL or to let you down at the last minute or for them to get a job halfway through a project. And often there’s a reason they are freelancers and that’s because they struggle to hold down a job in a fulltime role. I was also increasingly busy in my role as Head of Marketing in a city-centre tech business and was dedicating less and less time to GrowTraffic. Before you knew it we were talking about whether we could keep GrowTraffic going as it was or whether we’d have to make some serious changes.

It was at this point that Hannah came on board and within months Elicia joined too. We were all dotted all over the place and the guys implemented some really sound working from home strategies and communication systems and processes. These worked great, but at some point we still felt it was necessary to have an office. There were several reasons we needed to have an office, part of it was about credibility, part of it was to encourage and foster a culture between employees as the business grew, part of it was about mental health with the recognition that those of us ho had been used to working in an office still needed something of that for our wellbeing.

We found an office around 6 miles away from where Rachel and I live. Door to door it represents about 8 minutes in the car. It’s no distance. But suddenly, we found ourselves experiencing issues related to not being as close to home as we had been for years.

One of the things Rachel has always talking about is making a business culture that’s orientated towards working women. And what she meant by that was it tends to be women who do the childcare and need to be around to pick up children from school or collect them if they’re ill. Having worked around 20 or 30 miles away from home for the first few years of our son being at school, proximity meant that I couldn’t be relied on to help even if I had tried and inevitably I had a limited share of that mental load. When I finally started working for GrowTrafffic on a fulltime basis the ability to be there for Leon when he needed it was a revelation. But, getting an office only 6 miles away suddenly changed that again. Proximity makes a difference.

Believe it or not, 6 miles or 8 minutes in the car was too far to just jump in and fly home and then come back to the office. It’s not really of course, but psychologically it makes a difference. Almost as bad as working 30 miles away in the centre of Manchester, with a commute of over an hour.

During the COVID-19 lockdown, we’ve had to go back to working from home again. The great thing for us is that we were already ready for it. The processes and systems we had when we didn’t have a central office were so baked in we continued using them when we had the office and this meant we just carried on as we were when lockdown started.

There are loads of benefits from working from home and the main benefits come from the proximity, you’re able to put in your home without having hours worth of a commute. And if you share a house with others you find it increases or equalises the responsibilities over the household and the associated mental load. And this has to be a good thing. It’s something that we should all be encouraging.

The Relationship Benefits Of Working From Home Or Working Local

Since I’ve been working from home or at least working more locally, it’s something that’s been hugely beneficial for my marriage. It’s helped reduce some of the inequalities that arose not due to any reluctance to get involved or be active on my part but due to the fact I am now around more, being in the house at least three or four hours more each weekday. It makes a huge difference.

But there are downsides to working from home too. The biggest downside is the mental health implications of not spending enough time with other people. At GrowTraffic when we were all working from home we substituted this by going to conferences, networking and having monthly meetups between all team members. And it helped, but some members of the team (myself included) still struggled with being locked in the same four walls and not interacting with a wide group of people in a face to face capacity.

And whilst many employees understand the benefits of working from home, and many of them don’t want to lose those benefits, they also don’t want to work from home forever.

Businesses can do a lot to look after the wellbeing of their employees and with things like Zoom, Google Meet, Teams and Skype etc, people are able to get some of that face to face time with their colleagues and customers. But let’s face it, it’s not the same.

But lockdown should be teaching all those businesses with huge city centre offices a few lessons. One of those lessons is those big expensive offices aren’t absolutely central to the proper running of their business.

There are a number of half-way houses between city centre offices and having all employees working from home. For example, businesses could adopt regional hubs. For example, I used to work for a company that employed 1,200 employees and almost all of them worked from their purpose-built office block in the centre of Manchester, what if those 1,200 employees worked from smaller hub offices? The main issue with this would probably be the cost, but if it was comparable due to cheaper locations this would be hugely beneficial in reducing commute times for many people (excluding those people who live in the city their original office is in). It would also see fewer people in the same building congregating together. This would help ensure bugs weren’t passed around as much. And when I worked in Manchester and commuted too and from the city for an hour and a quarter each way on public transport, I was always sickening for something. Since working from home and even working in our small office with fewer people I’ve been much healthier.

But these regional hubs would also see people commuting and it would see people having to work with lots of people. What if there is another way? What if people started to work locally? What I’m thinking here is people would work from home a lot more, would have an expense account for working in a local cafe or in a hotdesking space, and then still have the option to go into a central office from time to time and as required.

Could you imagine if all those millions of people stopped commuting for hours every day? Could you imagine the impact that would have on trying to reduce emissions or how to prevent the spread of disease? It would be huge. And I believe it’s something the government should be incentivising.

What I know for certain is we can’t go back to business as usual after the Coronavirus Crisis has abetted. The New Normal that I hear everyone going on about has to be about creating a greener economy and a healthier economy. And when I say healthier, I don’t just mean in terms of reduced risk to coronavirus or cold or flu, but also in terms of our mental health. I also think this is the time to improve our productivity figures. It has to happen.

How Can Digital Marketing Agencies Demonstrate We Can Work Local

I think digital marketing agencies like ours are really well suited to work local. Most of the time we can do our work with just a laptop and a mobile phone. It doesn’t matter where we are we can just sit down and be productive. Sure, we do need to come together from time to time and communicate with each other regularly to get those creative juices flowing, but overall we can just crack on. And we do. We can show the rest of the economy how it’s done.

The digital industry, in general, can work in this way, it doesn’t have to be an agency doing SEO and content marketing as we do, but also people like photographers, videographers, developers etc. They can all work local and they can show everyone else how to do it.

by Simon Dalley
907 Views00 Likes
Tags: How Can Digital Marketing Agencies Demonstrate We Can Work Local The Relationship Benefits Of Working From Home Or Working Local Why Digital Marketing Agencies Should Lead The Way To Work Local Why Getting An Office That's Not That Far Away Is Not Always The Answer work local work locally working local working locally

Why Digital Marketing Agencies Should Lead The Way To Work Local