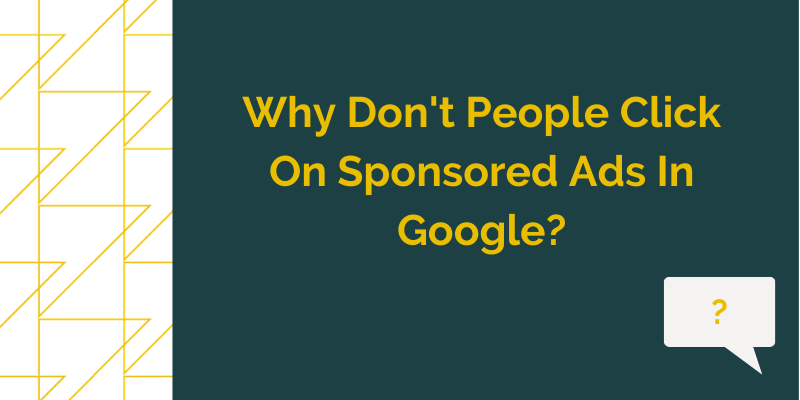 When you search for something on Google, hands up who clicks on the sponsored links at the top of the page? No, me neither, so why don’t people click on sponsored ads in Google?

What Are Sponsored Ads In Google?

Before I start, a quick explanation of sponsored ads in Google, in this week’s instalment of what I call ‘Easy To Understand Digital Marketing Videos Presented By Men In Questionable T-Shirts’

One of the reasons why people don’t click on sponsored ads in Google is that lots of humans are suspicious! We see an advert and we feel like it’s shoved in our faces.

They have the sort of effect and you just get used to scrolling past them to find the ‘real’ search results.

The idea that large tech companies are harvesting our data has been borne out in recent years by the stories of Cambridge Analytica working with Facebook.

Ever since paid for ads were introduced by Google in 2000, there has been suspicion as to what data they were gathering.

Way back in 2012 they changed their privacy policy which let them track and collect more data from users than ever before.

In 2018, partly in an attempt to look more transparent, Google rebranded its advertising platform to Google Ads.

In 2019, France fined Google 150 million euros for “abusing its power over the treatment of advertisers, saying it applied opaque rules and changed them at will.”

So you can see that now, in 2020, even though both Facebook and Google have since claimed to be more transparent on several occasions about what they do with personal data from users, there is a lack of trust which hasn’t really ever gone away.

Another thing about humans is they like to have a choice. The minute we feel like something is being pushed at is, we tend to want to move away from it.

When you are on Facebook and you start seeing adverts for something you have googled, the reaction from most people is a negative one.

The slightly creepy thought that our phones and laptops are listening to us has only grown over recent years.

Despite the fact it hasn’t actually ever been proven, many people are convinced that Google and Facebook not only use our data but listen to our conversations and read our private messages.

The reality could just be that they are really good at marketing!

Sometimes the simple answer to a puzzle is the right answer, but it is boring and a lot less interesting than a conspiracy theory.

They aren’t subtle enough, unlike some marketing techniques, to make you user feel like they have found a product ‘normally’.

Sponsored ads have a similar effect, why are they telling me to click here? Who are these people?

Once they have a particular reaction, it is hard to shake off, humans are also creatures of habit, heck even I don’t click on sponsored ads and I work for a digital marketing company.

Humans like habits and routines, they provide comfort and stability. Whether it is making breakfast or checking Facebook, Twitter, Instagram as soon as we wake up, we get used to doing things in a certain way.

Searching on the internet is the same, who uses all the different search engines? Exactly, you use Google.

Once you decide to ignore a sponsored ad, whatever the reason, you are likely to carry on doing it. Until you read a blog on the subject by GrowTraffic of course.

Why Use Sponsored Ads Then?

A good question, if sponsored ads are treated so negatively, why is anyone using them?

Well, not everyone is suspicious as me for a start!

Many people will use Google, Facebook et al and be quite happy with what they see.

Some people accept that companies are going to use their browsing data and that it is a natural way to make their online life more tailored for them.

Also, like any marketing or advertising technique, if it’s done well it can work.

With more and more competition on the internet, a well-marketed paid for advert could generate more clicks for the client.

A company struggling to make headway could use sponsored ads to get some more recognition of their company and brand.

Over a third of internet users (33%) click on paid-for ads because they match what they have searched for and 63% of people say they would click on a Google Ad.

Sponsored ads, like any form of advertising, is always going to provoke negative reactions from some people.

But, like a well-made TV advert or a Web campaign which goes viral, a well-tailored sponsored ad can generate traffic and results.

How to Pass Your Conversion Value to Google Ads

20 of The Best Video Ad Networks for Advertisers