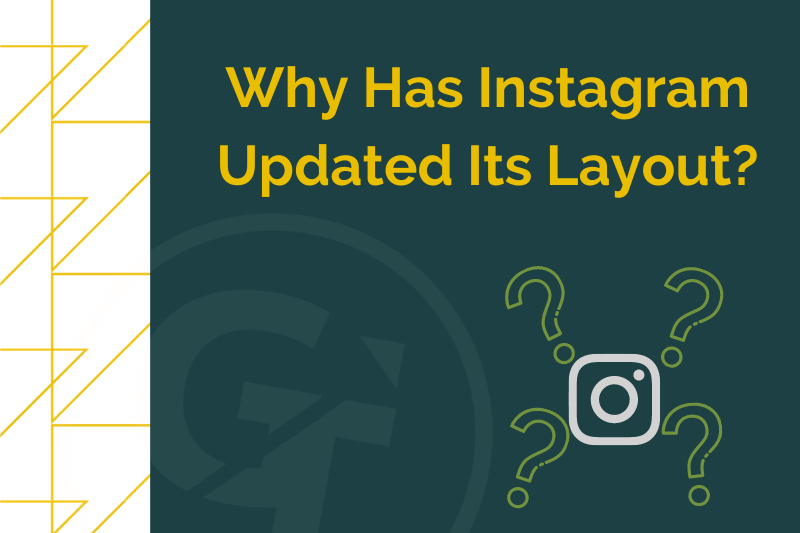 Over the past couple of months, Instagram has been testing a few different layout designs and over the last week, they have started to roll out the winner of their tests. This new layout has got some Instagram loyalists up in arms, so why are they doing it?
I’ve got about seven different Instagram accounts that I personally manage and I’ve seen the changes being tested across those different accounts at different times since September. Managing accounts that are constantly different is a bit of a pain but it’s been interesting to watch them being tested.

Last week the big change was rolled out to the majority of Instagram profiles. Of my seven accounts, only one of them is currently stuck in a limbo state but I expect this too will update soon enough.

The icons in the footer bar have been replaced by the Reels icon and the Shop icon.

The big reason for this change is Tik Tok and more specifically the Reels feature on Instagram that they have developed in answer to the competition from Tik Tok.

Instagram has always been about young people and creators, this demographic is part of the reason why Facebook bought Instagram in the first place. The problem is, a lot of young people were increasingly heading over to Tik Tok to do their creating there. Tik Tok hooked into the advancing smartphone abilities and we have seen an explosion in short creative videos.

To combat the threat, Instagram introduced Reels a few months ago. They used a range of hero brands to really get the functionality to the fore on the platform. Once there was a relatively significant amount of content built up through Reels it was inevitable that Instagram would have to work it into their interface.

And it’s not just the threat of Tik Tok and success of Reels that Instagram is introducing, they are also making shopping much more important. Since the start of the pandemic online shopping has increased at an even more rapid rate than any of us thought possible. So Instagram is introducing a kind of hybrid marketplace, which relies not only on feeds but also curated content and on the things the influencers are promoting. We’ve yet to see how it will pan out, but I’m enjoying looking for things.

At the moment one of my big frustrations with the new design change is the notifications button is only available on the homepage and isn’t available on the profile page. I think that’s probably intentional to get people exploring and using the platform more instead of just living in their own profile. But I do find flicking back and forth a little bit frustrating.

As always there will be a lot of moaning about this before people get used to the changes and then it will be like that was the way it had always been. As the old saying goes: Change is tiring but standing still can be deadly.

Social Media & SEO for Small Biz: Get the Best of Both Worlds