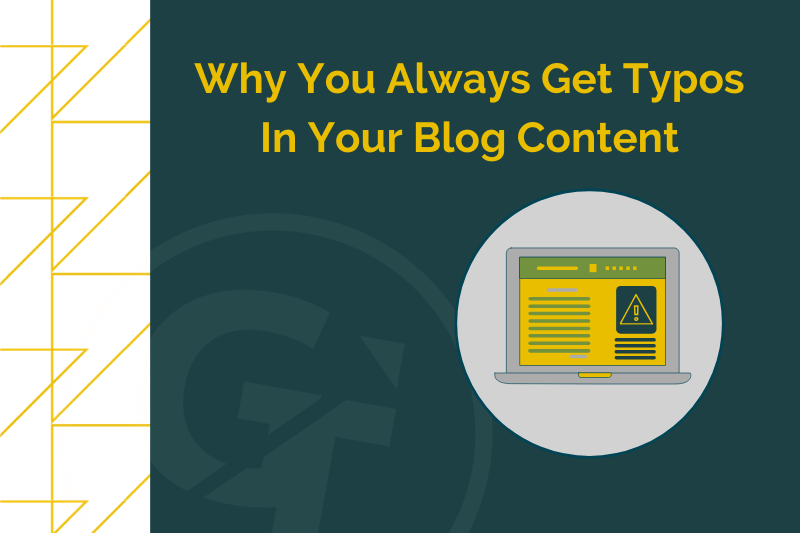 As an SEO and content marketing agency we create a lot of content, and whilst it’s fair to say from time to time the odd typo slips through, we have put processes in place to ensure there are fewer typos in the content we create for clients. But why is it that even the best writer in the world needs to have someone check over their content?

Because you’re reading this you probably know it’s notoriously difficult to spot your own typos. You get to the end of an article you’ve written. You’ve spent hours and hours working out the words you’re going to use in your article and you’ve really sweated about the plan and arrangement of your copy and you’re confident you’ve done everything you can to cover the topic you’re working on. You’ve been through your copy with a fine-tooth comb, rereading and amending it countless times until you’re happy with it. Then you publish it and wait. And what’s the first thing you get told? “There’s a typo in the first paragraph.”

There’s nothing most of us hate more than being told we’ve made a mistake and a typo is ultimately a mistake that’s completely on us. But it’s worse than it just being a mistake. When you’re creating an article you’re looking for your content to convey something, it influences and controls the direction of thought of your audience but typos disrupt your reader and challenge them to think about your content in a different way. Typos ask the question: “is this content any good and is this argument valid?”

According to Proof Reading Anywhere: “It is harder to be taken seriously — and harder to inspire people — in the writing world if your blog posts have basic grammar and punctuation mistakes. Especially if you are looking to get paid for your writing, it has to be top notch.” Personally I think ‘top notch’ should read ‘top-notch’ and that kind of proves the point.

Most annoyingly, typos are almost always words that you know how to spell or are words that are wrong for the sentence, but spelt correctly. We’ve already established that you’ll have gone through rounds of edits, so why have you missed them?

But there is some science to why we let typos slip through our work. Typos don’t mean the writer is careless or uneducated or has a low IQ, it’s generally because the writer is intelligent. The University of Sheffield’s typo specialist, psychologist Tom Stafford says: “When you’re writing, you’re trying to convey meaning. It’s a very high level task,”

When you’re writing about a topic you’re doing two main tasks, which have varying degrees of complexity. The first is you’re combining letters to create words. That is a relatively straightforward task. More complicated is combining sentence after sentence in order to create meaning and complex arguments.

Stafford goes on to say: “We don’t catch every detail, we’re not like computers or NSA databases, rather, we take in sensory information and combine it with what we expect, and we extract meaning.”

This is really handy for us. It takes a load of brainpower to read, so by being able to work out what’s being said without reading absolutely everything we can identify what’s going on and understand what the author is getting across without reading every single word.

This makes proofreading that bit more difficult though. Because we’ve already created the piece of content we’re reading, we already understand the meaning, so our brain already knows what it thinks should be there. Therefore it’s easy for our brain to skip typos or see things within a piece of copy that isn’t there at all. You already have a complete version in your head and that’s the comparison your brain is making.

It annoys the hell out of me when I’m doing it and I’m sure I’ll find typos in this piece when I look into it further – or get someone else to.

You’ll probably notice those articles written about a topic you are less aware of are the ones that include fewer typos. Funny that isn’t it? That’s because your brain doesn’t have a complete understanding of the topic and is more focused on getting it right. But guess what? If you review and edit the document a few times you’ll end up understanding the topic to the point where you’ll miss the typos you’ve started to insert.

Some writers even add the odd intentional typo into their content to get their audiences to think a bit harder about what they’re saying. In Made You Thunk: Engage Your Readers With Typos and Misquotes, Nick Gerni says “Sometimes typose suck you in.” (yeah that makes me cringe too). He goes on to say: “Misspellings and invented words work too.”

Here at GrowTraffic we love inventing the odd word. For example, we refer to GrowTraffic employees as GrowFos and we talk about the zigzag element in our branding as our Trafficgram. See, they’re a bit cringey but they made you think for a minute there!

So most of your readers are going to be forgiving about your typos in your articles because their brains will do the work and remove the typos for you. But, we’re not just creating content for our audiences if we’re being honest are we? We’ve got to get them as perfect as possible because typos reflect badly on us. There’s nothing worse as being that writer who already has the typos in their content. You end up being the one whose work everyone in the business checks to be on the safe side. And you know what, that kind of pressure will only make you check and rework your content more and more and you’ll just end up with more mistakes.

Worse still, proofreading is important for Google, because unlike your everyday readers, Google does pick up on every typo. If you have a load of typos in your content you’re going to find it more difficult – although not impossible – to rank for the terms and topics you want to rank for.

So what are you going to do about it? Here at GrowTraffic with have a handful of processes and systems to try to overcome the inevitable typos that are in content.

Get Grammarly. Grammarly is an app and Chrome extension that corrects spelling and tells you when your grammar is off. I’ve learnt so much about the way I write by using Grammarly and it’s hugely helped me to improve my writing. I can also see that over the years I’ve developed a load of bad writing habits. Grammarly has helped me iron some of these out.

Typos still creep in. The next thing to say is to review the content you’ve just written once, from a message perspective and then from a typo perspective. When you’re reviewing it for typos, don’t try to read the content you’ve just written, just try to read each word in relation to the word next to it. Don’t go back and constantly reread and retype it. If you do that you’ll end up putting new typos in.

The next thing is to get someone else to read it! Probably the most important thing here is picking the right person to proofread your content. Some people are really good at it, some people aren’t. Try to pick someone who is analytical.

But, I’ve always said the best policy is to get something live and improve as you go along. So maybe don’t sweat the small stuff too much, unless your content is getting loads of views and needs to be reviewed and improved.